CNN's Anderson Cooper rips Trump-backer for claiming FBI raid is a product of 'the swamp': 'You don't know that!' 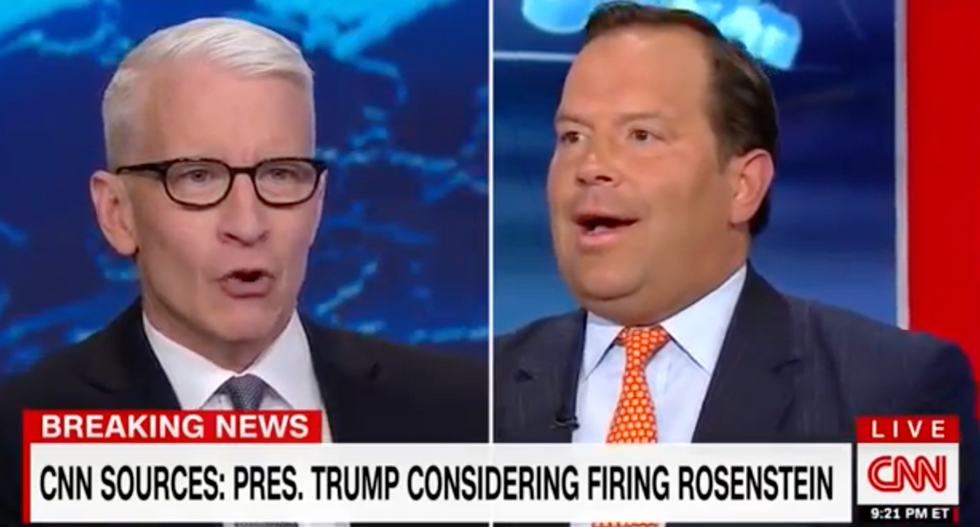 In a contentious exchange Tuesday, Anderson Cooper and fellow members of a CNN panel ripped Steve Cortes, a member of Donald Trump’s Hispanic Advisory Council, with Cooper at one point accusing the frequent Trump defender of “just saying” things.

The panel was discussing the FBI’s stunning raid on longtime Trump lawyer Michael Cohen on Monday.

“I don’t know that people understand just how amazing a situation we are in,” criminal defense lawyer Michael Garagos began. “People are glossing over this, but if you are in the criminal justice system right now and you understand that the FBI just executed a search warrant in both the home and office of the lawyer for the president of the United States. That is stunning. I don't know there is any precedent for that.”

“I agree, it is stunning,” Cortes replied. “It is stunning in the audacity that the Department of Justice is trying to usurp the power of the presidency.”

“How are they doing that?” Cooper wondered.

Cortes went on to claim “there is no crime” but a movement towards “impeachment—and that has been the base case since the beginning, this sham investigation.”

“So you think the FBI raided the home and the office and the hotel room where Michael Cohen was staying with judicial approval not because there is any criminality?” Cooper asked.

Cortes replied there isn’t a crime “related to the president” and this is instead “[special counsel Robert] Mueller’s attempt at a Hail Mary pass.”

“The american people weren't promised anything,” former FBI special agent Josh Campbell replied. “The special counsel was put in place to determine were there ties between the Trump campaign and Russia.”

“If during the course of the investigation additional crimes were unearthed, they would go after that,” Campbell continued.

“Everybody who would have approved this is a Republican,” Cooper reminded.

“And I hear that constantly,” Cortes shot back. “That is an illogical cover. The Republicans in Washington D.C. have been every bit as obstructionist … this isn't a Republican or Democrat issue, this is the swamp protecting itself and trying once again to nullify—“

Watch the clive below: