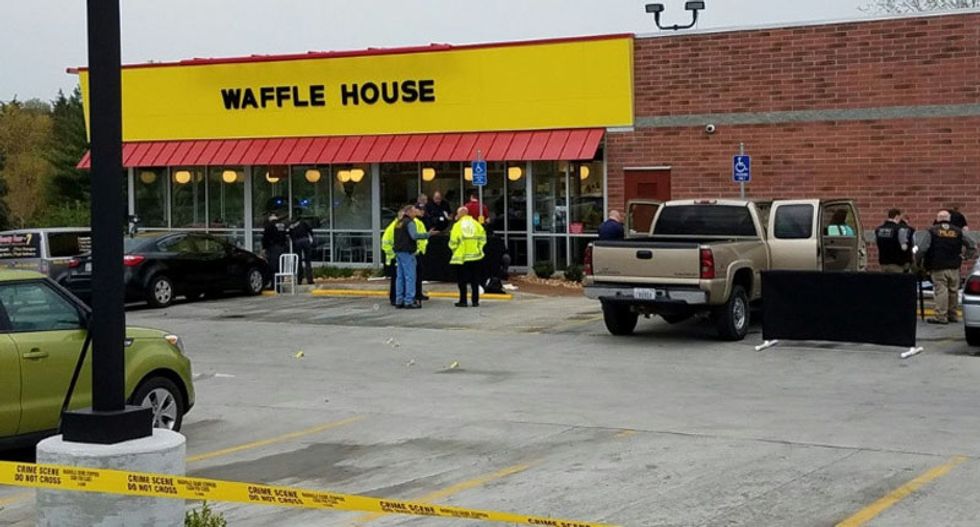 Officers investigate the scene of the shooting where a semi-nude gunman killed four people and wounded two others. (Metropolitan Nashville Police Department/AFP / HO)

The Waffle House restaurant in Nashville where a gunman killed four people reopened on Wednesday for the first time since the weekend attack, filling up with customers ordering breakfasts as a makeshift memorial of flowers piled up outside.

The closely held chain brought in extra staff from other locations and corporate offices to serve grits, eggs and waffles to a steady stream of customers, including many making their first visit in a display of solidarity for the victims.

Eric Puschmann, a pastor at the nearby Free Will Baptist church, joined staff for prayers before the restaurant opened, he said.

“They have good strong hearts,” said Puschmann, 37. “There were tears of pain and tears of laughter.”

The suspect in the shooting, Travis Reinking, used an AR-15 rifle to kill two people inside and two people outside the restaurant before a bystander knocked him down, sending him fleeing, police said. Reinking, 29, was jailed on Monday after a manhunt lasting more than 30 hours. He faces charges of murder and attempted murder in court next month.

At the Waffle House, Michael Ritchey walked by the makeshift shrine outside and ordered an omelet.

“I look around and see people back here today,” said Ritchey, a 40-year-old healthcare consultant. “This is awesome. I have a lump in my throat.”

Some patrons came because they saw the restaurant had promised to donate all proceeds made in the next 30 days to the victims’ families.

Also on Wednesday, more details emerged of the suspect’s paranoid tendencies as a Nashville computer repair store released audio of an angry phone call Reinking had with a confused customer-service representative.

Reinking already had a history of bizarre encounters with law enforcement, and relatives in his Illinois hometown and former colleagues in the crane-operator business have told police of his delusional beliefs that the singer Taylor Swift is hacking his electronics and stalking him.

Reinking had visited the Dang It Repair store in March, saying he believed his laptop had been hacked and he had messed it up trying to fix it, the store’s owner, Robert Hartline, said in an interview on Wednesday. Staff reset the machine and returned it the next day.

Two weeks later, a man identifying himself as Reinking called back, according to a recording of the call released by the store. Reuters did not independently verify the recording’s authenticity.

The conversation took an unusual turn after he asked a customer representative about an issue with his laptop.

Reinking seemed to suggest the store put something on his computer.

“Why are you guys doing this, man? I don’t get it. What are you getting out of this?” he said.

“I’m not sure I understand the question,” the representative said.

The representative suggested he bring the computer to the store.

“Yeah, well, go kill yourself then, jump off a bridge or something,” the man responds, according to the audio recording posted online by the Dang It Repair store.

Hartline, the store owner, said the representative remembered it as the time as an odd call, but added that it was not unusual for his company to deal with customers with strange behavior.

A public defender representing Reinking has declined to comment on the case. A court hearing is scheduled for May 7.


“This morning there have been calls to Okemos High School and Jackson High School about an active shooter which has been found to be a hoax. Reminder that reporting a false threat against schools or business is a crime,” Michigan State Police First District tweeted Tuesday morning.

A newly elected North Carolina Republican is active in a white nationalist church where Olympic bomber Eric Rudolph was radicalized.

State Rep. Rep. Donna Henderson (R-Calvin), who was elected with a slate of Donald Trump-aligned populist legislators, has extensive ties to the Church of Israel and its notorious founder's family, according to the Jamestown Sun columnist Rob Port.