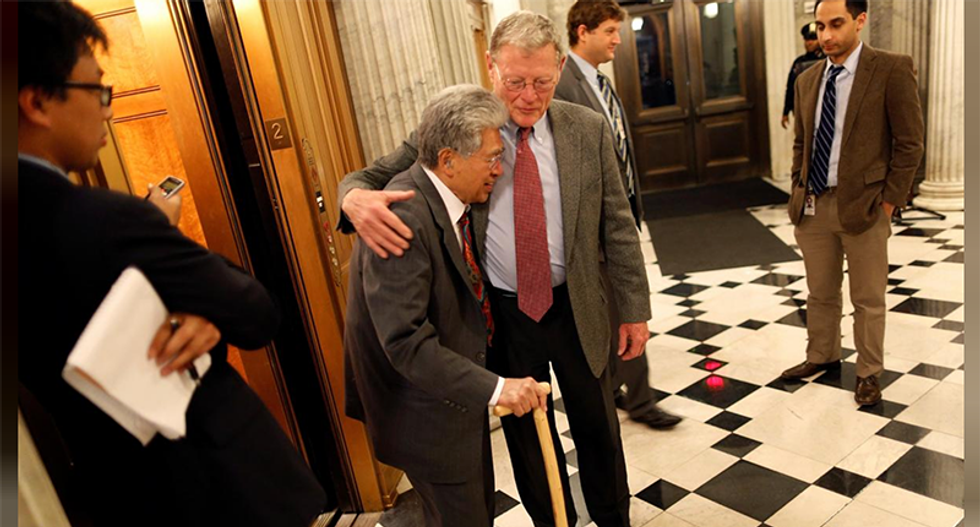 Former Senator Daniel Akaka, the first native Hawaiian in the U.S. Senate, who strove for recognition of Filipino veterans who fought with the United States during World War Two, died on Friday at age 93.

“Our state mourns the loss of this man of upright character,” Hawaii Governor David Ige said in a statement.

“While we celebrate his military service and dedication to our nation’s veterans, his advocacy of the Hawaiian language and culture and his work in Congress to recognize Filipino veterans, he was first and foremost a family man,” Ige said.

Ige ordered Hawaii’s state flag and the U.S. flag to be flown at half-staff in honor of Akaka.

Akaka, an educator turned Democratic politician, served more than three decades in the U.S. Congress. He held various committee positions including as chairman of the Senate Committee on Indian Affairs.

He served in the U.S. Army from 1945 to 1947 and was deployed to the Pacific Ocean theater at the end of World War Two. He chaired the Senate Committee on Veterans Affairs from 2007 through 2010.

In a 2008 interview with PBS Hawaii, Akaka said he was an effective lawmaker and highlighted his legislation to provide U.S. benefits to Filipino veterans who fought during World War Two, when the Philippines were a U.S. territory.

He was praised online by U.S. Representative Tulsi Gabbard, a Democrat from Hawaii, and others for embodying the spirit of “aloha,” a Hawaiian word used to express warmth and sincerity.

While in the Senate, Akaka repeatedly introduced a bill to pave the way for native Hawaiians to gain political sovereignty and self-governance. Known as the Akaka Bill, it was most recently introduced in 2009 but never won passage.

Akaka was elected to the U.S. House of Representatives in 1976 to represent Hawaii and held the seat until 1990, when he was appointed to the Senate to replace Spark Masayuki Matsunaga, who died. Akaka won re-election multiple times before retiring in January 2013.

“Daniel K. Akaka was beloved by everyone in Hawaii, and his colleagues of both parties in Washington D.C.,” Hawaii Senator Brian Schatz, a Democrat, said on Twitter. “A pure heart, a determined warrior for native Hawaiians, and a true public servant.”