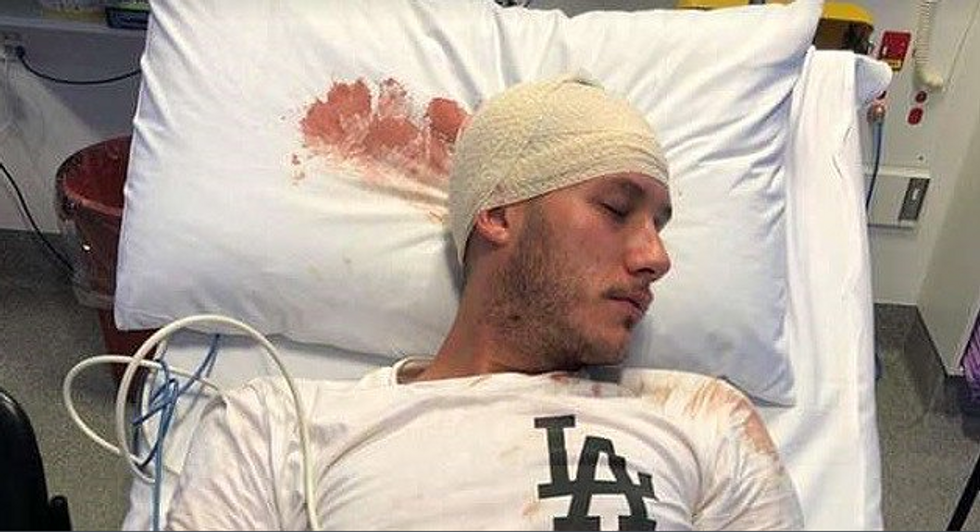 While having a fun night out with his sister a gay man was attacked and is now suffering from a possible brain injury, reports Daily Mercury news.

Bradley Skinner, was eating at a Domino’s in Queensland, Australia. Skinner, 25, said he was minding his own business when a man walked past him and called him a "faggot."

"This guy walked past, and we were all laughing and having a good time about to go home, and he called me a faggot," Skinner said.

Bradley ignored the comment, but his sister decided to stand up for him.

"I just ignore it because I'm used to that stuff, but my sister doesn't take too kindly to it so she got up and said 'what the hell'."

It was at this point that the man started to physically attack both of them.

"He ended up hitting her in the face ... and it all went on from there and he got out this chain and started whacking me with it," Skinner said.

The man started beating Skinner with a chain.

His sister tried to pull the man off, but ultimately had to watch her brother suffer.

"He just kept hitting him until he was knocked out," she said. "I tried to rip him away from my brother, but it didn't work. I thought he was dead, he was just laying there, there was blood coming out of his head It was horrible to see your brother laying there."

Doctors originally thought he had brain damage. "They thought I might have brain damage, but they've ruled it down to vertigo for now," Skinner said.

The attacker has not been identified, and no one has been charged.

Skinner said he has experienced verbal abuse for his sexuality before. "I love who I am but I have been intimidated, I'm embarrassed going into the dining hall at work...It's a very manly environment," he said.