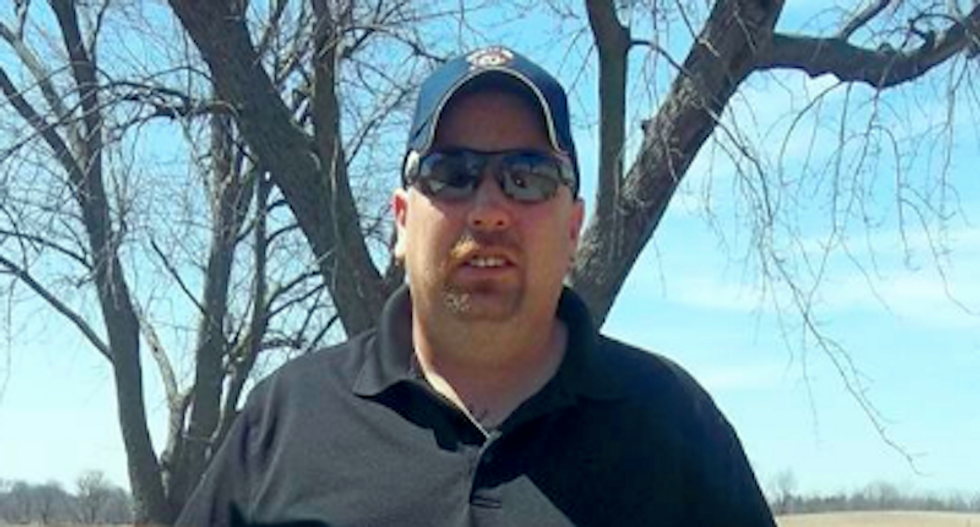 A firefighter was placed on leave after he was charged with three counts of ethnic intimidation just weeks after a colleague was disciplined for sharing a racist Facebook post.

Kyle Artis pleaded not guilty Tuesday during a court appearance in Clark County Municipal Court and was released on his own recognizance, and then placed on leave by the German Township Fire Department, reported the Springfield News-Sun.

“He told me he got into a confrontation with some tree trimmers and there was words exchanged between them and police were called,” said Tim Holman, the township's fire chief.

Police were called Monday afternoon to a home in Springfield, where subcontractors working for Ohio Edison trimming trees around power lines reported a confrontation with an armed man.

"They were trimming a tree when a white male began yelling racial slurs and pulled out a gun," police said in an affidavit.

Police said the 43-year-old Artis was leaving when they arrived and denied using racial slurs or brandishing a shotgun, saying he was only moving the firearm from the top of a refrigerator to his bedroom.

A Facebook page maintained by Artis displays a cover photo of a gun rack, which appears to show a shotgun and a rifle, in front a Confederate flag emblazoned with the words "heritage not hate."

One of the tree trimmers admits to cursing at Artis, who they said went inside to get the shotgun and stood in the doorway staring at the workers -- who said they feared for their lives.

Police said they found a loaded shotgun during a search of the firefighter's home.

“We are here to serve the public and we just don’t condone this," Holman said. "I mean we are here to help and gain the trust of the community and things like this erode that trust."

Bradley Baugh, a lieutenant with the Green Township department, was fired from Springfield Fire/Rescue Division over the post just weeks after starting his job there.

Green Township trustees were scheduled to hold a hearing Wednesday to determine whether Baugh will keep his job there.

Artis faces six to 12 months in prison per charge, if convicted, and more than $6,000 in possible fines.

The township has already begun an independent investigation of this week's incident.