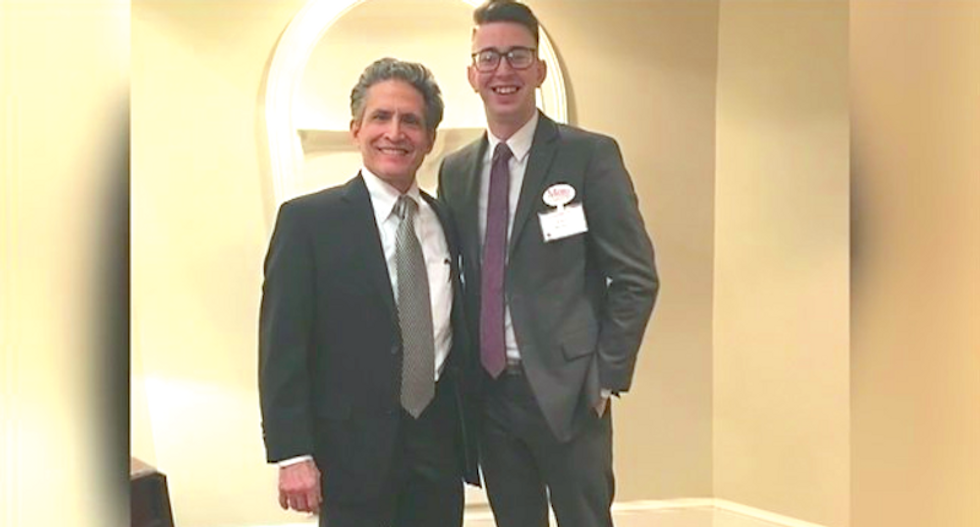 A conservative activist with white nationalist ties has turned up again working for a Republican campaign after his past got him dismissed by another Indiana candidate.

Campaign finance documents show the Moss campaign paid $201.25 to Shumaker for "campaign supplies," but a source told the station that he was the physician's campaign director.

“I’m not going to give you my official title,” Shumaker told the TV reporter when asked for comment.

Shumaker said he was a volunteer, which is also how the Moss campaign described the 25-year-old activist.

"Caleb Shumaker has been a volunteer for my campaign for several months and I have appreciated his help along the way," Moss said in a statement. "I can say from our interactions these salacious allegations are false. Caleb is a strong young conservative and devout in his faith."

Moss, who is Jewish, said Shumaker is a father in a multi-ethnic family and strong supporter of Israel, and he dismissed the allegations against his staffer as "racial politics" by incumbent GOP Rep. Larry Buchson.

"This is fake news and a planted story by Congressman Bucshon’s desperate re-election campaign," Moss said. "Let me be clear, there is no place for racism and White Nationalism in the Republican party."

Shumaker's background was exposed in November after Roy Moore touted the endorsement of the Indiana First PAC the young activist chairs.

Moore, who ultimately lost his Senate race, used the endorsement as a show of national support after multiple women accused him of molesting them or pursuing them for sex decades ago, when they were teenagers and he was an assistant prosecutor in his 30s.

Mike Braun, an Indiana Republican, terminated Shumaker from his own Senate campaign after reporters discovered the conservative activist had previously been part of the white supremacist National Youth Front -- although he denies the firing.

“I resigned from that campaign to start a PAC," Shumaker said, whose organization is intended to "grow the Trump coalition." "This whole idea of he fired me is completely false.”

Shumaker, who served two years ago as the Indiana state director of Millennials for Ted Cruz, insists didn’t initially realize the group was a white supremacist organization and claims he ended his involvement after less than a month.

“It wasn't anything when I joined it,” Shumaker told WEHT. “It was a couple individuals I didn't know, who knew me, said, ‘Hey, we should get millennials together.’”

In fact, Shumaker served as first chairman of the group, which was aimed at college students and is tied to three white supremacists who turned up as Trump supporters during the campaign — California lawyer William Johnson, anti-Semitic ex-professor Kevin MacDonald and James Edwards, host of the Political Cesspool radio program.

Shumaker stepped down as the group's chairman in January 2015, after other National Youth Front members forced him out over his interracial marriage -- and both he and Moss insist he's not racist.

“Everybody here knows the truth,” Shumaker said. “I was part of something, when I found out what it was, I left … because of their ethnic racial views I didn't agree with.”