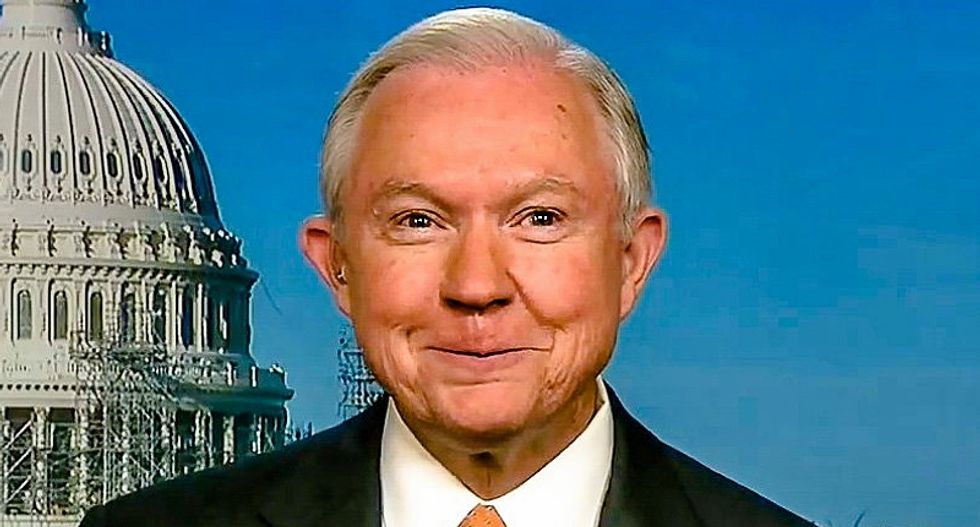 President Donald Trump has gone above and beyond in his attempt to stop immigrants from coming into the United States, regardless of their situation. Attorney General Jeff Sessions is taking that to another level by trying to stop women fleeing domestic violence.

Politico Magazine revealed Tuesday that Sessions is "reviewing" whether sexual violence or domestic violence should be a reason that people can seek safety from persecution.

The move comes after Trump told a West Virginia audience that women in the caravan walking through Mexico to the United States that women were being “raped at levels that nobody's ever seen before.” Presumably, if the president cares so much about violence against women, he would empathize with women seeking safety from those abusing them. Instead, the president used the example as a justification for his allegation in 2015 that Mexican migrants were rapists.

Sessions instructed federal prosecutors to enforce a "zero tolerance" approach to those attempting to cross the boarder without the proper paperwork. Sessions told border sheriffs at a meeting in New Mexico that asylum seekers were on the rise because of “loopholes in our laws being exploited by illegal aliens and open border radicals every day," Politico cited.

Since immigration courts are part of the Justice Department, instead of the independent federal court system, the attorney general has the authority to make his own decisions and rules about those fleeing sexual or domestic violence.

In October 2017, Sessions told immigration judges that asylum was there to protect those fleeing their country “because of persecution based on fundamental things like their religion or nationality.” According to him the immigration courts are being “overloaded with fake claims.”

Sessions cited a 2016 case from a woman from El Salvador who said that she was psychologically demeaned and sexually attacked by her husband, despite their divorce. She gave statements from neighbors and proof of her protective order. An immigration judge had denied her but the appeals court overturned the decision to grant her asylum.

Sessions said the case inspired him to decide whether “being a victim of private criminal activity,” such as domestic violence, could fall under asylum requirements.

In a separate incident, Sessions questioned whether immigration judges can suspend deportation cases. Doing so would make it more difficult for migrants to apply for visas as trafficking victims or to become permanent residents if they've been abused by a spouse or family member who might sponsor them.

Washington D.C., lawyer Toni Maschler handles such asylum cases in immigration courts. She noted, "you put all these cases together and the potential impact on vulnerable women is magnified."