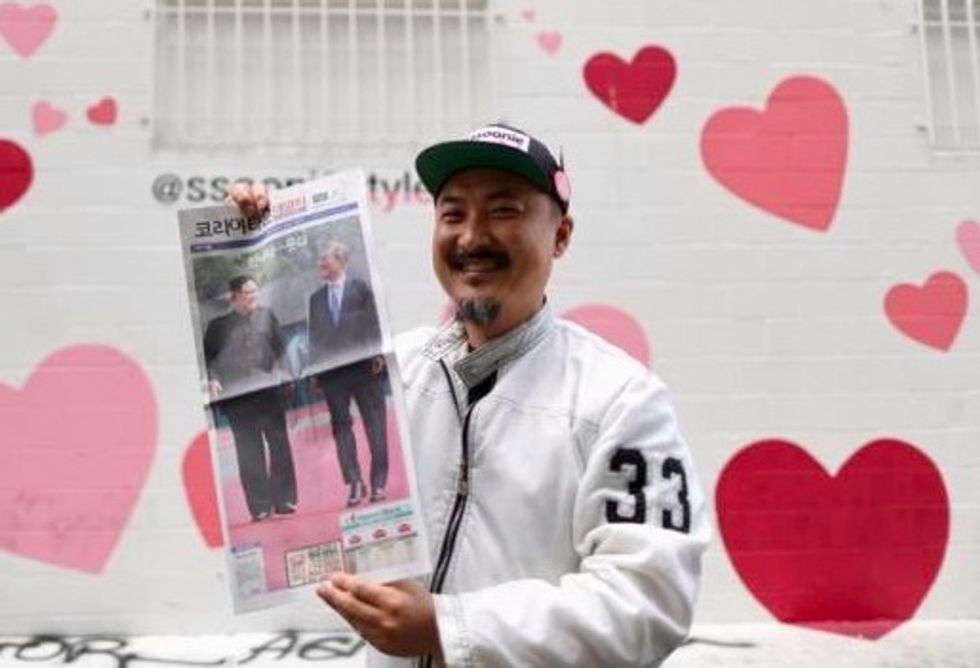 In the gritty, billboard-festooned Los Angeles neighborhood of Koreatown, at the heart of America’s largest ethnic Korean community, residents expressed bemusement and hope at the latest promise of rapprochement between North and South Korea.

The first summit in a decade between leaders of the divided peninsula ended on Friday with a pledge by the two sides to work toward “complete denuclearization” and talks with the United States and China on an agreement officially declaring an end to Korean War of the 1950s.

The talks between South Korean President Moon Jae-in and North Korean President Kim Jong Un - only the third meeting ever between leaders of the two nations - is to be followed in coming weeks by a potentially more momentous summit between Kim and U.S. President Donald Trump.

While Korean-Americans of all political stripes have long shared an abiding dream of a formal inter-Korean peace and eventual reunification of North and South, their expectations are tempered by decades of disappointment and cycles of heightened tensions and detente.

South Korean-born restaurant owner Ki Shin, 47, who has lived in Los Angeles for eight years, said he had his doubts about prospects for a significant breakthrough.

“Now is the third time my presidents (of South Korea) have met a North Korean leader,” he said, referring to summits in 2000 and 2007. “There were two times that failed. This time we want success, but who knows? Nobody knows,” he told Reuters on Friday.

Angela Oh, 62, a longtime Korean-American resident of Koreatown, or K-Town as it is known to locals, was more hopeful.

The swift flurry of summit-level diplomacy, following months of provocative nuclear missile tests by the North and stridently hostile rhetoric from both Kim and Trump, took some Korean-Americans by surprise.

Seoul Radio and the Korea Times newspaper, both part of the same company, share the top two floors of a commercial office building off Wilshire Boulevard in the heart of K-Town, a three-square-mile (7.7 square km) enclave of about 120,000 residents that ranks as the most densely populated district in Los Angeles County.

Despite a streetscape cluttered with commercial signs and electronic billboards, the proliferation of Korean barbecue eateries and night life has transformed it into one of the city’s most popular neighborhoods, especially among young hipsters.

The greater Los Angeles area as a whole is home to roughly 300,000 ethnic Koreans, the largest concentration of Korean-Americans anywhere.

Although some in K-Town credited tough talk by Trump and Moon’s determination to engage with Pyongyang, Sang said North Korea’s young leader was motivated chiefly by growing pressures from international sanctions and the example of China’s economic success.

“On the North Korean side, it’s about time to do this. They need prosperity,” said Sang, who emigrated from South Korea to the United States in 1984. “China is very prosperous, wealthy and has good well-being. He (Kim) may see it in North Korea’s future, like, ‘We can do it.’”

Some Korean immigrants noted that citizens of their homeland were generally more indifferent to swings in Korean diplomacy over the years, jaded, perhaps by hard realities that come with close proximity. The South Korean capital Seoul lies an hour’s drive from the world’s most militarized frontier.