'Momentum is on our side,' Oklahoma teachers union leader declares 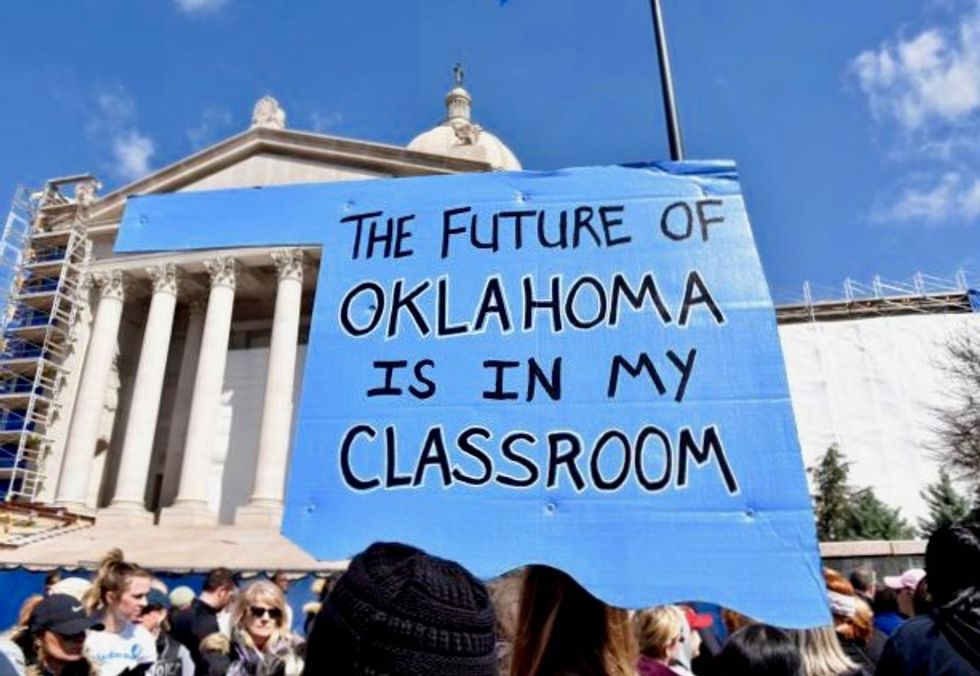 Oklahoma teachers carried their walkout over school funding and higher pay into a ninth day on Tuesday as a union leader declared that educators had the advantage of momentum in a battle with the Republican-dominated state legislature.

State lawmakers have approved nearly $450 million in new taxes and other revenues to help fund teachers’ raise pay and boost other education spending since the walkout began on April 2, but the union is pushing for more action to raise overall spending by $600 million each year.

“Momentum is on our side,” president Alicia Priest said in a video posted late Monday night on the Oklahoma Education Association’s Facebook page.

The walkout closed public schools serving about 500,000 of the state’s 700,000 students on Monday, and schools in the state’s largest cities, Oklahoma City and Tulsa, were shut again on Tuesday.

The Oklahoma strike comes amid a wave of action by teachers in states where budgets have been slashed, as measured by per-student spending, over the past decade.

The nonpartisan Center on Budget and Policy Priorities said Oklahoma’s inflation-adjusted per student funding fell by 28.2 percent between 2008 and 2018, the biggest reduction of any state.

A West Virginia strike last month ended with a pay raise for teachers. Educators in other states, increasingly angry over stagnating wages, are also considering walk-outs.

Opponents of the Oklahoma tax hikes say lawmakers could bolster education spending by cutting bureaucracy and waste rather than raising taxes.

Republican lawmakers said they have made major moves to boost education spending and it may be difficult to find more money.

“This year’s education budget, which spends $2.9 billion (a 22 percent increase), has been signed into law. I don’t anticipate that bill being changed this year,” Republican Senate Majority Floor Leader Greg Treat said on Facebook ahead of this week’s legislative session.

Thousands of teachers packed into the state Capitol on Tuesday to urge lawmakers to remove a tax exemption on capital gains that would bring in another $100 million in revenue. They also asked Governor Mary Fallin to veto the repeal of a hotel tax that is valued at an estimated $50 million.

The new taxes and revenue approved by lawmakers translate into an average teacher pay raise of about $6,100.

Teachers want a $10,000 raise over three years. The minimum salary for a first-year teacher is currently $31,600, state data shows.