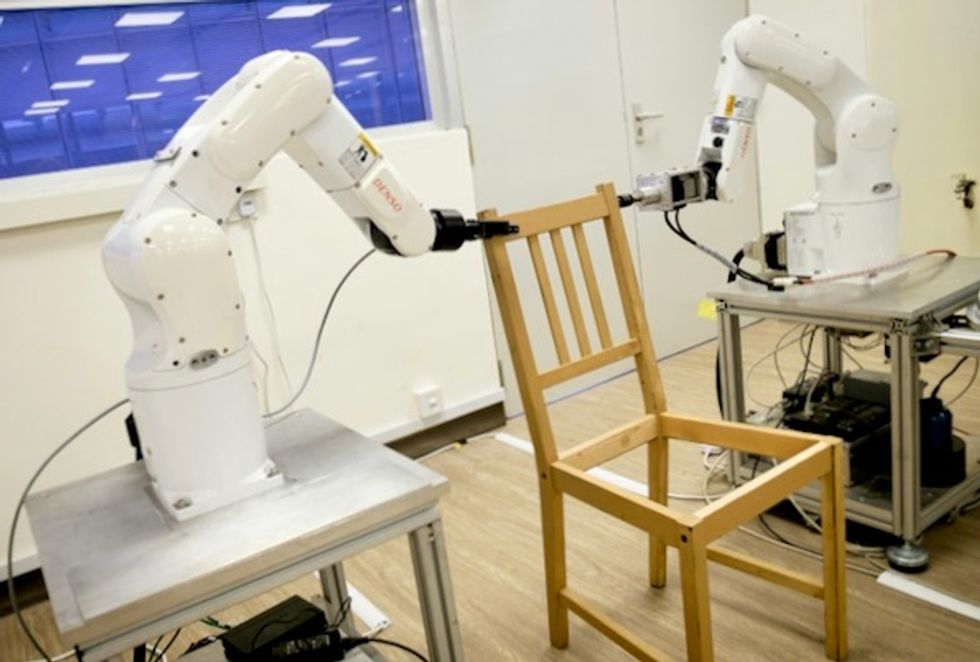 Chair being made by robots SINGAPORE/AFP / Handout

Sick of struggling with incomprehensible instructions and a baffling array of planks and screws? Help is at hand in the form of a new robot that can assemble an IKEA chair in minutes.

The robot, developed by scientists at Singapore's Nanyang Technological University, can put together the wooden IKEA chair in just eight minutes and 55 seconds -- a swift timing that may give even DIY enthusiasts a run for their money.

The device, consisting of two mechanical arms with grippers, starts the process by taking photos of the parts spread on the floor with a 3D camera, which is supposed to mimic the cluttered environment after flat-pack furniture is unboxed.

Each arm has a similar range of motions to that of a human, while sensors mounted on the wrists monitor how much force is being exerted by mechanical fingers as it picks up tiny parts to expertly put the chair together.

"For a robot, putting together an IKEA chair with such precision is more complex than it looks," said team leader Pham Quang Cuong, an assistant professor at the university.

"The job of assembly... has to be broken down into different steps, such as identifying where the different chair parts are, the force required to grip the parts, and making sure the robotic arms move without colliding into each other."

The team is now looking into further developing the robot so it can learn to construct furniture by copying humans, reading an instruction manual or even just viewing a finished product.

They are also working with the automotive and aircraft manufacturing industry where the robot could be used for such tasks as drilling holes in aircraft.

But those looking for help in assembling more household items from Swedish furniture giant IKEA may be disappointed -- for now the unnamed robot can only construct a humble chair.