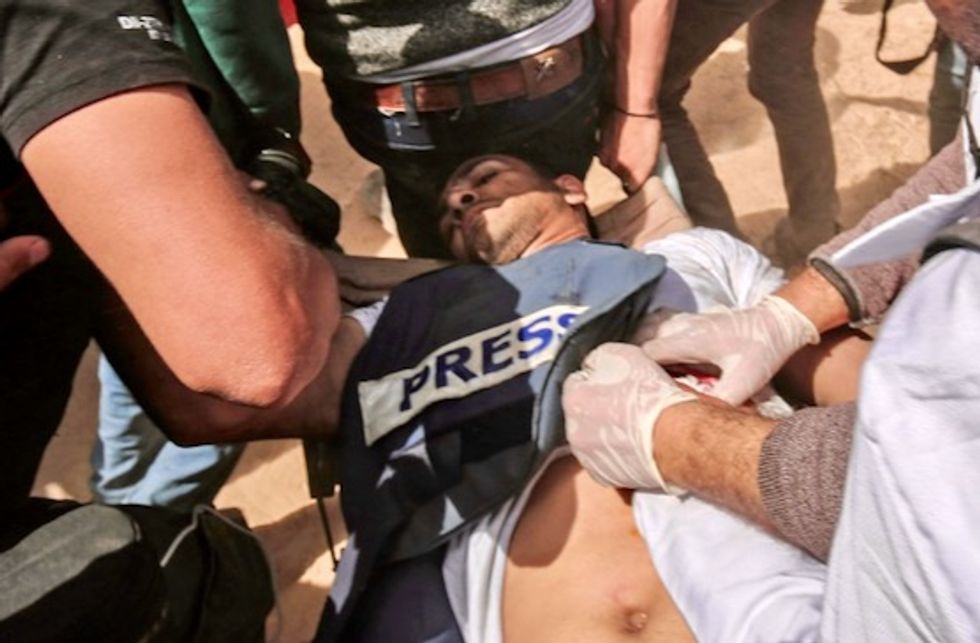 Demonstrators assist an injured Palestinian journalist Yasser Murtaja during clashes with Israeli security forces following a protest near the border with Israel, east of Khan Yunis, in the southern Gaza Strip, on April 6, 2018 AFP / SAID KHATIB

Six Palestinian journalists were shot and wounded by the Israeli army during clashes Friday between demonstrators and troops on the Gaza border, the Palestinian Journalists' Syndicate said.

The union said the six were shot despite wearing clothes clearly identifying themselves as journalists, adding it held Israel "fully accountable for this crime".

None of the injuries were life threatening, but it called for the perpetrators to be held accountable.

An Israeli army spokeswoman had no immediate comment on the statement.

The Gaza Center for Media Freedom, which defends Palestinian journalists, called on the international community to intervene to protect its journalists.

At least seven protesters were killed during Friday's protests, as thousands of Palestinians faced up to Israeli forces in five locations along the Gaza-Israel border.

Gaza's health ministry also reported that 408 Palestinians had been taken to hospitals and medical centres for treatment. Those killed included a 16-year-old, it said.