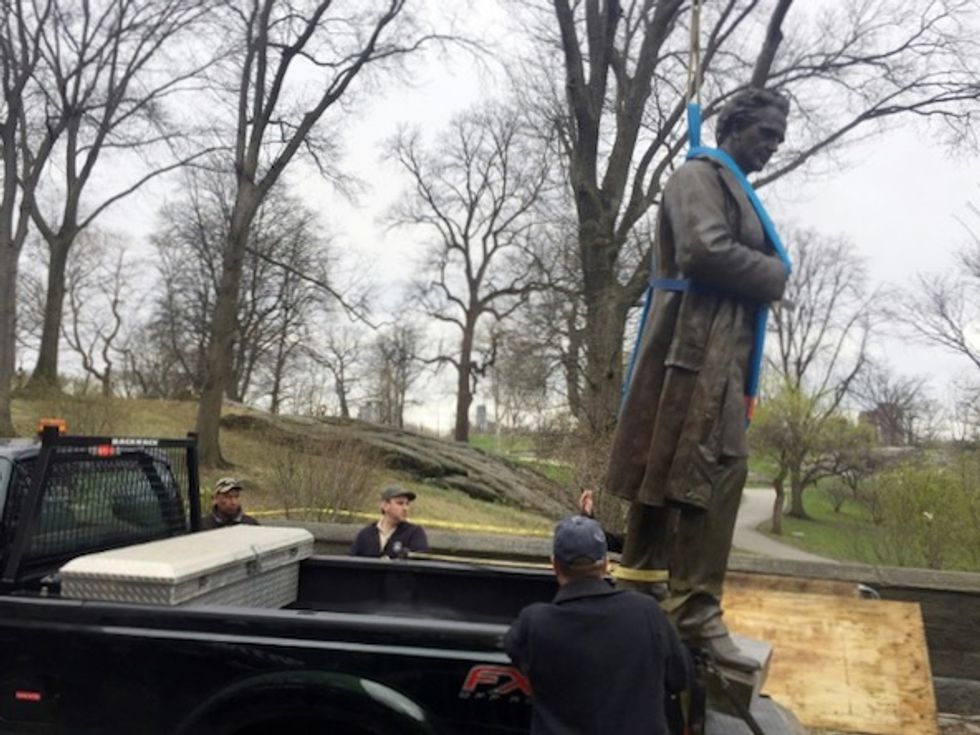 New York on Tuesday removed from Central Park the statue of a 19th century gynecologist who experimented on enslaved black women without anesthesia, as the United States increasingly confronts racism in its history.

A commission recommended in January that the statue of J. Marion Sims be relocated from Central Park to a Brooklyn cemetery, where Sims is buried, and steps be taken to explain the legacy of a man considered the father of modern gynecology.

"It's about time!" shouted an African American woman, one of around two dozen people who attended the removal on Tuesday. "Sims is not our hero," shouted the others.

For Bernadith Russell, a doctor at New York-Presbyterian Hospital, it's not "important to say he didn't make contributions, but it's important to acknowledge that these contributions really came at the expense of women who weren't able to consent."

"I recognize his contributions but it's sort of if Josef Mengele had contributions to the field of medicine, we wouldn't put a statue to him because of how he got that information," she said.

Mengele was a German Nazi physician who carried out experiments on prisoners at concentration camps during the Holocaust.

But it was the only one of four statues on public land that New York Mayor Bill de Blasio agreed to relocate following the review, as the United States debates tributes to figures whose legacies are increasingly scrutinized.

The Democrat ordered the 90-day review after deadly violence at a neo-Nazi rally in Virginia last August built nationwide momentum to remove symbols of the pro-slavery Civil War-era South.

New York is keeping in place statues of Christopher Columbus and former US president Theodore Roosevelt, as well as a plaque dedicated to Philippe Petain -- a World War I hero who later collaborated with the Nazis -- albeit with additional signs to provide context.

A monument to indigenous people will also be erected near the Columbus statue at the gateway to Central Park.

Columbus, the so-called man who "discovered America," has been increasingly denounced as embodying the genocide of indigenous Americans.

Critics complain that the Roosevelt monument is an image of racial hierarchy, depicting a triumphant Roosevelt on horseback looming over Native American and African men.

"Our approach will focus on adding detail and nuance to -- instead of removing entirely -- the representations of these histories," de Blasio said in January.