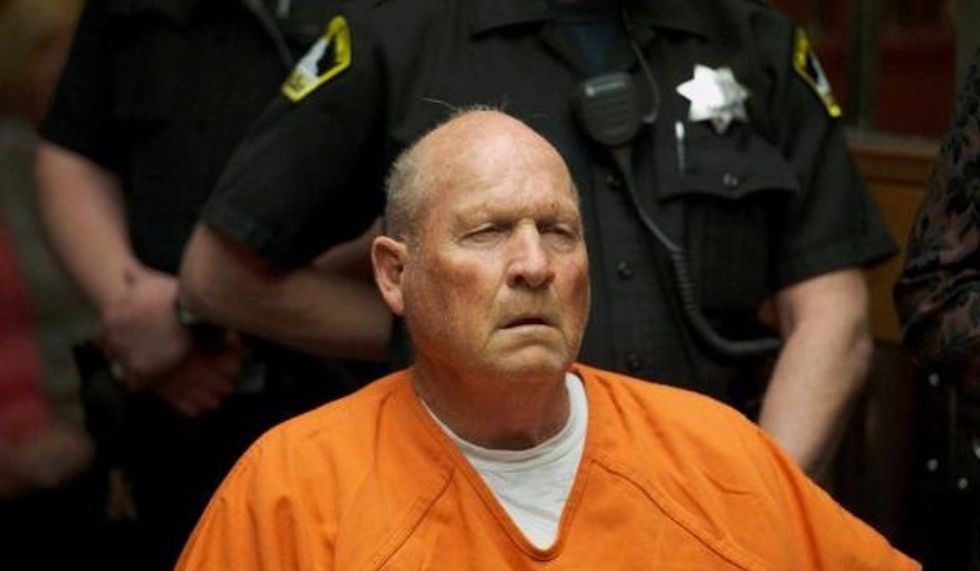 An ex-policeman charged with murder in connection with a string of rapes and killings across California attributed to the “Golden State Killer” made a brief initial court appearance on Friday, sitting in a wheelchair and speaking in a hoarse voice.

Joseph James DeAngelo, 72, who was arrested this week at his home in the Sacramento suburb of Citrus Heights, was formally apprised of two of the eight murder counts against him and ordered back to court on May 14.

DeAngelo, wearing orange jail garb and shackled to a wheelchair, spoke only a few words to acknowledge that he understood the charges and that he was being represented by a public defender.

He was largely inexpressive during the brief hearing, appearing to squint to see the judge across the courtroom and speaking haltingly in a barely audible rasp.

The former police officer and divorced father of three has so far been charged with eight counts of murder blamed on the Golden State Killer, crimes that sprawled from Sacramento all the way to Southern California, including two in Sacramento County, two in Ventura County and four in Orange County.

He is suspected in a dozen slayings as well as 45 rapes and more than 120 burglaries in 10 California counties, a decade-long crime spree considered one of the most prolific in state history.

DeAngelo was in court on Friday only on the two murder charges filed against him in Sacramento County, for the Feb. 2, 1978 slayings of Brian Maggiore, 21, and his wife Katie, 20.

Investigators finally cracked the case, which has long haunted victims’ families and law enforcement, by comparing crime scene DNA to genetic information on commercial genealogy websites that consumers use to explore their ancestry.

Detectives followed the family trees of close matches, seeking people who might be the killer. The process produced a promising lead a week ago, when the DNA of a relative pointed to DeAngelo based on his age and the fact that he lived near where the attacks occurred.

DeAngelo was identified as a suspect about two months after the case gained renewed attention in the book “I’ll Be Gone in the Dark,” by journalist Michelle McNamara, who died in 2016.

Investigators found DeAngelo, placed him under surveillance and obtained his DNA from a discarded object, finding a match to the crime scene samples.

In addition to being known as the Golden State Killer the unknown suspect was also dubbed the “East Area Rapist” and the “Original Night Stalker,” at various times.

DeAngelo was a police officer in two small California communities - Exeter and Auburn - during the 1970s. He was fired from the Auburn force in 1979 after being accused of shoplifting.

Writing by and additional reporting by Dan Whitcomb in Los Angeles; Editing by Leslie Adler and James Dalgleish