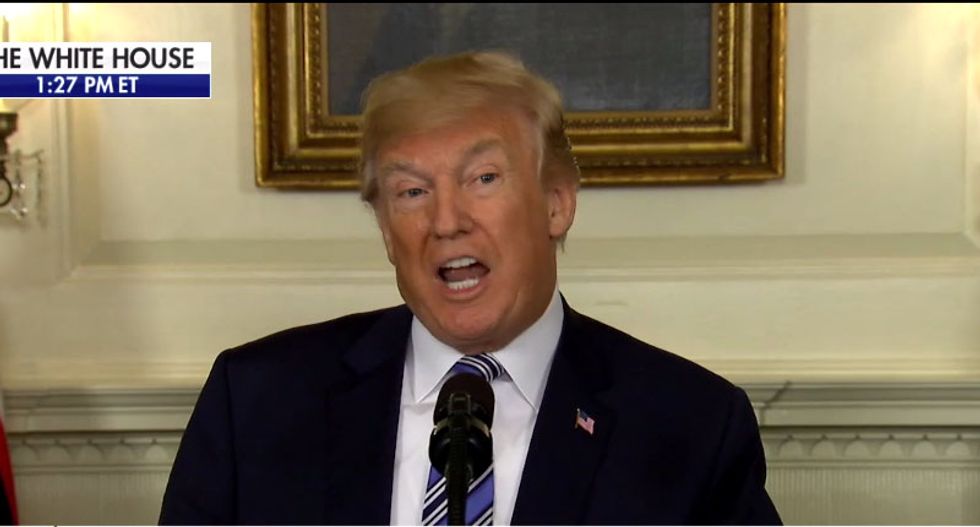 US President Donald Trump gave his blessing to talks aimed at formally ending the war on the Korean peninsula Tuesday, setting the stage for a major diplomatic breakthrough at a series of upcoming summits.

With a rare inter-Korean meeting 10 days away, and Trump's own landmark sit-down with Kim Jong Un still eyed by early June, the US president opened the door to a peace treaty that has eluded diplomats for more than half a century.

"North Korea is coming along," Trump said confidently as he hosted Japanese Prime Minister Shinzo Abe at his Mar-a-Lago resort in Florida.

"South Korea is meeting and has plans to meet to see if they can end the war and they have my blessing on that," said Trump.

"People don't realize the Korean War has not ended. It's going on right now. And they are discussing an end to the war."

Trump appeared to confirm that North and South Korean talks on April 27 will touch on a possible peace treaty -- a deeply symbolic replacement to the more ad-hoc armistice signed in 1953.

The US-led United Nations command, China and North Korea are signatories to the half century old accord, but most experts agree South Korea would likely have to be a signatory to any successor agreement.

Turning to his summit with Kim, Trump revealed "five locations" were being considered.

"That will be taking place probably in early June or before that assuming things go well," he said.

"It's possible things won't go well and we won't have the meetings and we'll just continue to go on this very strong path we have taken," Trump added.

Officials say that no decision has yet been made, but China, North Korea, South Korea, and Panmunjom in the Demilitarized Zone between the two countries are seen as possible locations.

Panmunjom was the site of the signing of the Korean Armistice Agreement in 1953 and will be the location of the April 27 summit between Kim and South's President Moon Jae-in.

Ross Williams, Georgia Recorder
Georgia has got a lot of extra money right now. If the state’s estimated $5 billion budget surplus were printed out in dollar bills, it would come up to just under 20 square miles, enough bills to carpet every square inch of the state’s five busiest airports, with enough singles left over to buy five Boeing 737 MAX 8 jets and park one at each tarmac.

And that $5 billion is in addition to the other approximately $5 billion in the state’s rainy-day fund, as well as the remainder of the state’s share of federal COVID-19 relief money.

As Georgians continue to feel the pinch of inflation, the economy remains a top issue among voters. In a July Gallup poll, 35% of Americans listed one of several economic issues like inflation and fuel prices as the most important problems facing the country today.