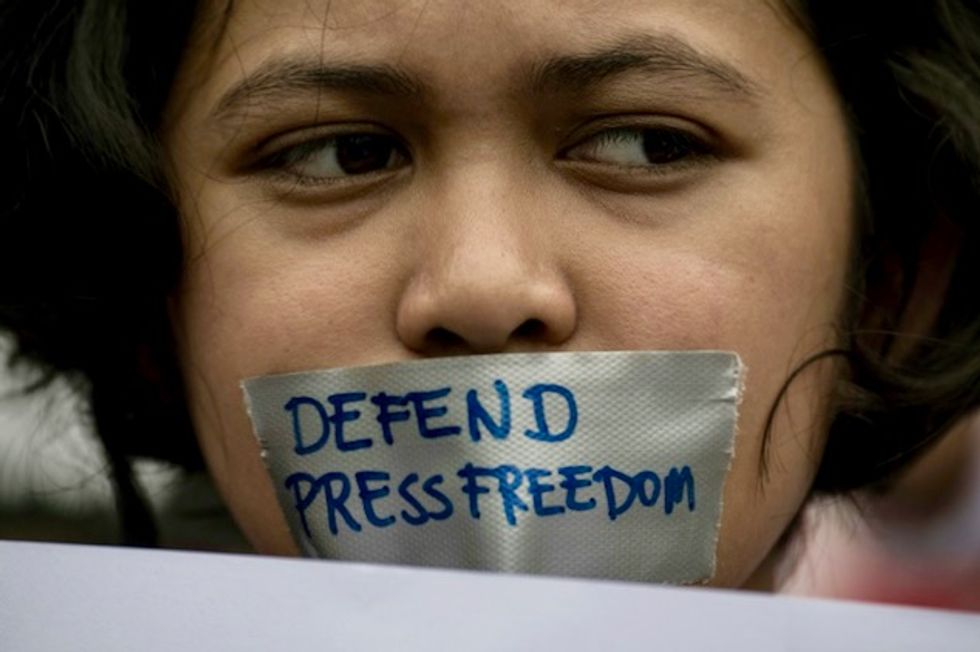 Press freedom around the world is under threat from a triple whammy of US President Donald Trump, Russia and China's bid to crush all dissent, a watchdog said Wednesday.

Reporters Without Borders (RSF) warned that a "climate of hatred and animosity" towards journalists combined with growing attempts to control the media pose a "threat to democracies".

Its annual report said that reporters were the target of a growing wave of authoritarianism with leaders whipping up hostility against them.

The group accused the world's three superpowers -- the US, China and Russia -- of leading the charge against press freedom, with Trump regularly launching personal attacks on reporters and Beijing exporting its "media control model" to strangle dissent elsewhere in Asia.

The slide towards "strongman" and populist politics in Europe, stoked by Moscow, was threatening freedoms in the region where they were once safest, it added, with Hungary, Slovakia and Poland setting off alarm bells.

"The unleashing of hatred towards journalists is dangerous and a threat to democracy," RSF chief Christophe Deloire told AFP.

"Political leaders who fuel loathing for reporters... undermine the concept of public debate based on facts instead of propaganda. To dispute the legitimacy of journalism today is to play with extremely dangerous political fire," he added.

RSF said that hostility towards the media is "no longer confined to authoritarian countries such as Turkey and Egypt", but was poisoning the political atmosphere in some of the great democracies.

"More and more democratically elected leaders no longer see the media as part of democracy's essential underpinning, but as an adversary to which they openly display their aversion," the report said, picking out Trump, India's Narendra Modi and Philippine leader Rodrigo Duterte for particular criticism.

The US president had referred to reporters as "enemies of the people", a term once used by Stalin, it said.

RSF accused Vladimir Putin’s Russia of "stifling independent voices at home… and extending its propaganda network by means of media outlets such as RT (Russian Today) and Sputnik."

It had even harsher words for Beijing, saying "Xi Jinping's China is getting closer and closer to a contemporary version of totalitarianism.

"Censorship and surveillance reached unprecedented levels thanks to the massive use of new technology" in his first term in office, the report said.

Now the Chinese government "is trying to establish a 'new world media order' under its influence, by exporting its oppressive methods, information censorship system and Internet surveillance tools," it added.

"Its unabashed desire to crush all pockets of public resistance unfortunately has imitators in Asia," the RSF said, condemning Cambodian Prime Minister Hun Sen's "ruthless offensive" against the media.

It said Beijing's influence and tactics were also being felt in Thailand, Malaysia and Singapore.

Turkey -- the world's biggest jailer of journalists -- has fallen into the most repressive 25 countries in the world.

The watchdog said that "media-phobia" there is now so pronounced that journalists are routinely accused of terrorism and "those who don't offer loyalty are arbitrarily imprisoned."

North Korea remains the most repressive country on Earth closely followed by Eritrea, Turkmenistan, Syria and then China.

Saudi Arabia, Bahrein, Vietnam, Sudan and Cuba also remain among the worst offenders, according to the RSF ranking of 180 countries.

Malta tumbled 18 places to 65 after the assassination of investigative journalist Daphne Caruana Galizia.

But not all the news was bad. Ecuador jumped 13 places after tensions eased between the government and privately-owned media, while Justin Trudeau's Canada entered the European-dominated top 20.

Jamaica climbed to eighth overall, above Belgium and New Zealand, and Gambia jumped 21 places -- the biggest rise in Africa -- just ahead of Angola and Zimbabwe.

The departure of the three African countries' "predatory presidents" was the main reason for their improved performance, the RSF said.

As usual, Scandinavian countries topped the list with Norway deemed as having the world's freest press for the second year in a row.