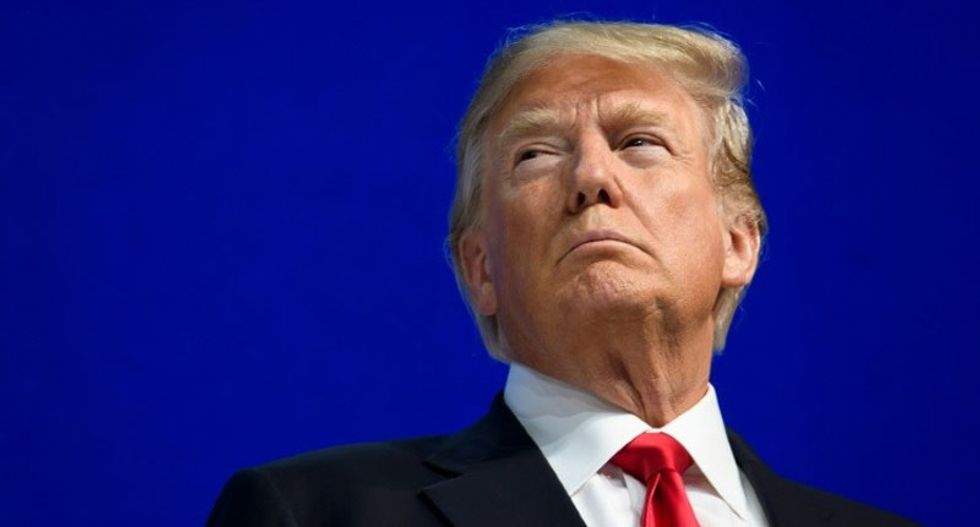 US President Donald Trump on Monday pledged "major decisions" on Syria after a suspected chemical attack on a rebel-held town, as calls grew for an international response to the crisis.

Trump condemned what he called a "heinous attack on innocent" Syrians in Douma, as he opened a cabinet meeting at the White House, adding that decisions would come in the "next 24-48 hours."

"This is about humanity -- it can't be allowed to happen," he said.

The Syrian regime and it ally Russia have rejected claims of an attack, with Moscow arguing against jumping to any "dangerous" conclusions.

Trump -- who last year launched a missile strike on a regime base after another alleged chemical attack -- warned Sunday that there would be a "big price to pay".

US Defence Secretary Jim Mattis said that Washington does not "rule out anything", while Trump and his French counterpart Emmanuel Macron vowed a "strong, joint response".

The crisis was due to be discussed later Monday at an urgent UN Security Council meeting, with the US circulating a draft resolution for a new independent inquiry of chemical weapons attacks in Syria.

Russia, which has repeatedly said that rebels in Syria were preparing a "provocation" to prompt foreign military action, warned against acting hastily over the alleged chemical attack.

"It's necessary to examine very carefully what happened in Douma... without this information, making any deductions is wrong and dangerous," said Kremlin spokesman Dmitry Peskov.

Rescuers and medics in Douma say more than 40 people died after an alleged poison gas attack late on Saturday in Douma, the last rebel-held pocket of the one-time opposition stronghold of Eastern Ghouta.

Access to the area, which has faced weeks of regime bombardment, is limited and there has been no way to independently verify the accounts.

The Organisation for the Prohibition of Chemical Weapons, a UN watchdog, said it was investigating the allegations but that so far only a "preliminary analysis" had been carried out.

Russian Foreign Minister Sergei Lavrov said Russian experts had visited the site of the alleged attack and "did not find any trace of chlorine or any other chemical substance used against civilians".

Both Damascus and Moscow had warned against using the allegations to justify military action against Assad.

It briefly appeared in the early hours of Monday that action had been taken, as Syrian state media reported missile strikes on an airbase, but blame later fell on Israel which has carried out repeated strikes on regime targets.

Washington and Paris denied having carried out the strikes and SANA and the Russian army later said Israeli F-15s had fired several missiles at the base from Lebanese airspace.

The Syrian Observatory for Human Rights, which monitors the country's conflict, said 14 fighters were killed, including Syrian army officers and Iranian forces.

Iran's Fars news agency said three Iranian fighters were killed in the strike and the foreign ministry in Tehran condemned "strongly the aggression and air strike by the Zionist regime".

Israel declined to comment on the latest air raid.

Nick Heras, an analyst at the Center for a New American Security, said Israel appeared to have seized on a moment of international outrage over Douma to strike Syria.

"On the eve of potential US and French strikes against Assad in response to the Douma gas attack, it is likely the Israelis already had the intention to strike at the T-4 base, and timed their attack to maximise the destruction they could inflict on Iranian forces," he told AFP.

Israel has repeatedly warned it will not accept its arch-foe Iran entrenching itself militarily in Syria.

In February, it accused Iranian forces at the T-4 base of sending a drone into Israeli territory. After targeting Iranian units in Syria in retaliation, an Israel F-16 was shot down by Syrian anti-aircraft fire in one of the conflict's most notable escalations.

Israel then carried out what it called "large-scale" raids on Syrian air defence systems and Iranian targets, which reportedly included T-4.

Syrian regime forces have waged an assault since February 18 on Ghouta, that has killed more than 1,700 civilians and left Islamist rebels cornered in their last holdout of Douma, Ghouta's largest town.

After capturing most of Ghouta, Syria and Russia secured two negotiated withdrawals last month that saw 46,000 rebels and civilians evacuate.

Following fraught negotiations and a concentrated regime bombing blitz, state media on Sunday announced a deal was reached for Jaish al-Islam to leave Douma within 48 hours and release hostages it was holding.

Several buses of detainees arrived in Damascus overnight after having been freed by Jaish al-Islam, and rebels were being evacuated in a parallel operation on Monday, SANA said.