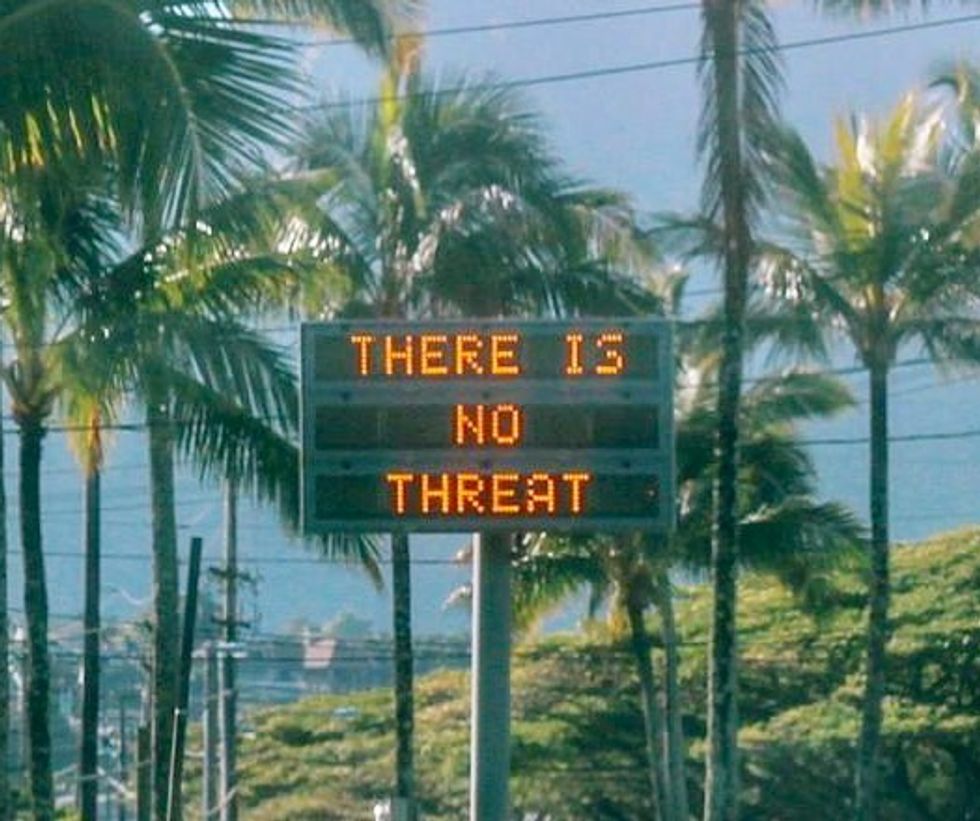 An electronic sign reads "There is no threat" in Oahu, Hawaii, U.S., after a false emergency alert that said a ballistic missile was headed for Hawaii, in this January 13, 2018 photo obtained from social media. Instagram/@sighpoutshrug/via REUTERS

A U.S. government report on Tuesday blamed Hawaii’s false alert of a missile attack in January on a combination of human error and inadequate safeguards.

The alarm, which went uncorrected for 38 minutes after being transmitted to mobile phones and broadcast stations, caused widespread panic across the Pacific islands state.

The Federal Communications Commission’s final report on the incident followed disclosures that the employee who issued the warning mistook a test drill for an actual attack.

The FCC said the primary error was the misunderstanding by the employee who sent the alert, but it also blamed a miscommunication between two supervisors. It added that Hawaii authorities should not have allowed a single employee to send an alert without requiring confirmation from a second person.

The report found that Hawaii conducted far more drills than typical and did not have a plan to respond and correct a false alert. It also blamed deficiencies in Hawaii’s training.

The top two civilian officials of the Hawaii Emergency Management Agency resigned in January after the incident and a warning-system officer who admitted to mistakenly issuing the alert was fired. Hawaii has made numerous changes in an effort to prevent future incidents and named a new emergency management agency administrator last month.

A Hawaii investigation in January found the system for activating a missile alert and conducting emergency drills was deeply flawed, lacking sufficient clarity, fail-safe controls or even a pre-programmed way of issuing a false alarm notice to the public.

The Hawaii Emergency Management Agency referred questions to Lieutenant Colonel Charles Anthony, a spokesman for the Hawaii Department of Defense, who called the FCC report “comprehensive” and said it covered much of the same ground that the state’s reviews had found. He said Hawaii had already adopted or was in the process of implementing all of the FCC recommendations.

FCC Commissioner Jessica Rosenworcel said in a statement the report found the alert “the result of multiple human and operational failures. ... Fixing this should be a top priority – from working to promote best practices to establishing a mechanism for false alert reporting.”

The FCC report recommended that all states require two employees to approve an emergency alert and have procedures in place to quickly address false alerts.