US teachers face tough choice: Love of the job or living wage 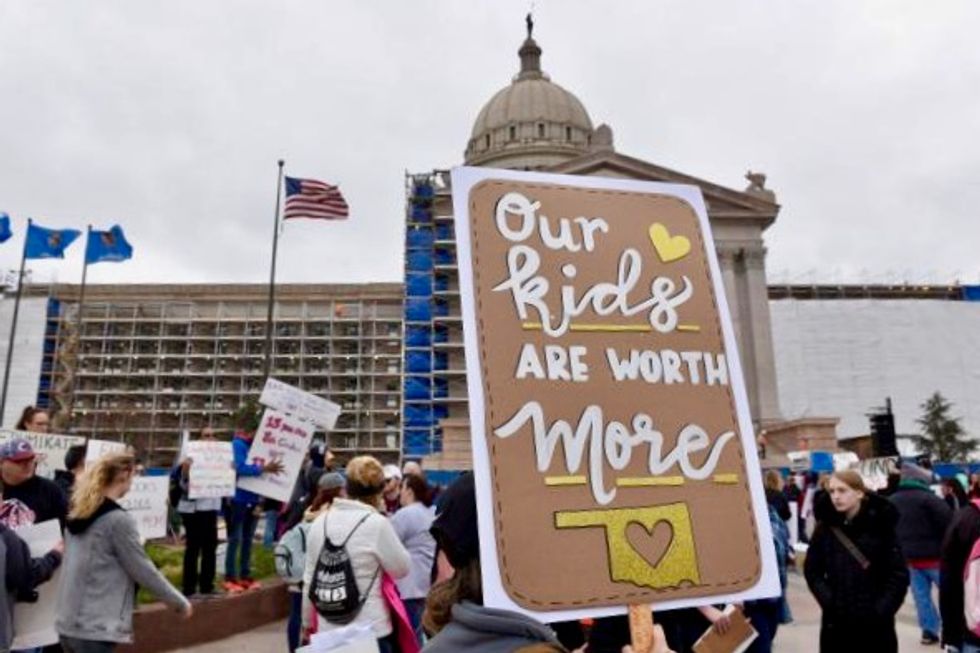 Teachers rally outside the state Capitol for the second day of a teacher walkout to demand higher pay and more funding for education in Oklahoma City, Oklahoma, U.S., April 3, 2018. REUTERS/Nick Oxford

John-David Bowman, Arizona’s 2015 “Teacher of the Year,” considers himself lucky: he can do the job he loves without worrying about supporting his family because he relies on his wife’s salary.

Things are harder for third-year Oklahoma teacher Jenny Vargas. The divorced mother of a 6-year-old girl is leaving her home state to take a job in Coffeyville, Kansas, where she can earn $8,000 a year more and be able to make ends meet.

Stories like theirs have sparked a wave of strikes and threats of more across the country over the past month as teachers in West Virginia, Oklahoma and Kentucky have walked off the job to protest long-stagnant teacher pay and school budgets.

Teachers in Arizona have threatened similar action if lawmakers do not meet their demands for more spending on schools.

Vargas, who teaches second grade in a Tulsa school, joined thousands of Oklahoma teachers who crammed into the state Capitol in Oklahoma City this week and others held sympathy rallies around the state. They demanded lawmakers pass a tax package that would raise another $200 million for the state school budget to provide up-to-date books and other classroom materials. The protests continued on Wednesday.

“It was never my intention to leave the state of Oklahoma,” Vargas said in a phone interview. Despite her love for her students, she laments that she made more per year working at Walmart as a student than she does teaching, and said she is moving to give her daughter a better life.

The walk-outs have shone a light on states where largely Republican-controlled legislatures have slashed funding for public schools.

Oklahoma ranked 47th in spending per student, according to National Education Association data, and its average salary for a high school teacher is $42,460, according to U.S. Bureau of Labor Statistics (BLS) data.

Bowman, who teaches social studies, is better off, earning slightly over $50,000 a year at his Mesa, Arizona, high school, having boosted his pay over the years with extracurricular assignments including coaching baseball. That puts him above the $48,020 mean for the state, but still below the $58,030 national median, according to the BLS.

But over his 11 years of teaching, pay raises have not kept pace with the cost of living in the fast-growing Phoenix area, Bowman said. Many of his colleagues wait tables, mow lawns or drive for ride-share services to make ends meet, he added.

“I decided to teach because I felt it would be a job I could do for a couple of years and I could give back to my community,” Bowman said. “But I fell in love with the profession and here I am eleven years later.”

He’s been able to stay because his wife, a designer, earns considerably more.

As Bowman and Vargas struggle financially, education union leaders warn that the cuts in school spending across the country are scaring away future teachers.

“We are at a crisis now where if you go to the colleges of education, every single one of them will tell you they are seeing a drop in the number of applicants,” said Lily Eskelsen Garcia, president of the National Education Association union.

Realizing that low wages will make it difficult for teachers to pay for the advanced degrees that the field requires, she added, “parents are telling their sons and daughters, ‘Don’t become a teacher.’”