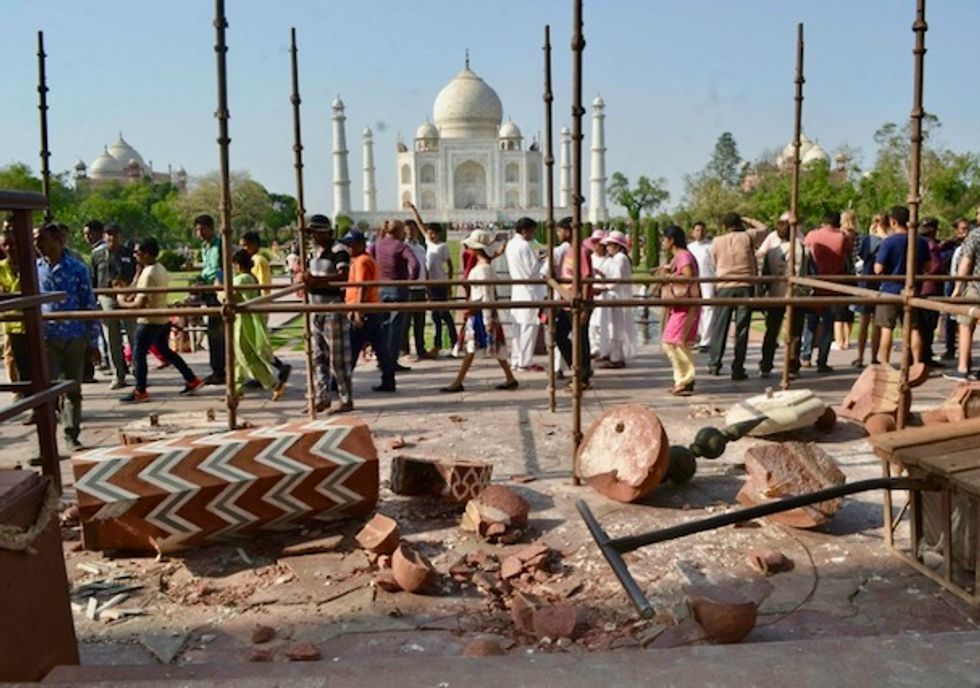 A violent storm has destroyed two ancient pillars at the entryways to the Taj Mahal, an official said Thursday, underscoring the fragility of the centuries-old marble monument to love.

The four-metre high sandstone minarets topped by ornate spires were left in chunks after being felled by strong winds late Wednesday.

"Two decorative pillars collapsed last night amid high-velocity winds. One of the pillars stood at the royal gate, and the other at the southern gate," an official from the Archaeological Survey of India told AFP.

None of the four white marble minarets surrounding the Taj -- or the spectacular shimmering mausoleum itself -- were damaged in the storm, authorities said.

Tourists often get their first glimpse of the Taj -- a UNESCO world heritage site -- through the royal gate, a grand fortress-like entrance made largely of red sandstone. It was flanked by two imposing minarets before the storm brought one crashing down.

Footage showed the stone pillars lying in large broken pieces, the distinct spire still intact but separated cleanly from the shaft. Nobody was injured by the falling steeples, authorities said.

Mughal emperor Shah Jahan built the Taj Mahal as a tomb for his beloved wife Mumtaz Mahal, who died giving birth in 1631.

The Taj -- one of the world's most popular tourist attractions -- is beset by problems from air pollution yellowing the marble to insects leaving green stains on its rear wall.

Efforts to restore its grandeur have dragged into a fourth year, with scaffolding marring the view for the 10,000-plus tourists that visit the 17th-century mausoleum every day.

Work is yet to begin on its main dome, with authorities concerned about how to proceed with handling the fragile centrepiece.

The Taj has attracted world leaders and royalty, including former US President Bill Clinton. Diana, the late British princess, was famously photographed alone on a marble seat there in 1992.