WATCH: National Guard colonel and sergeant demoted for using a dinosaur puppet in a re-enlistment ceremony 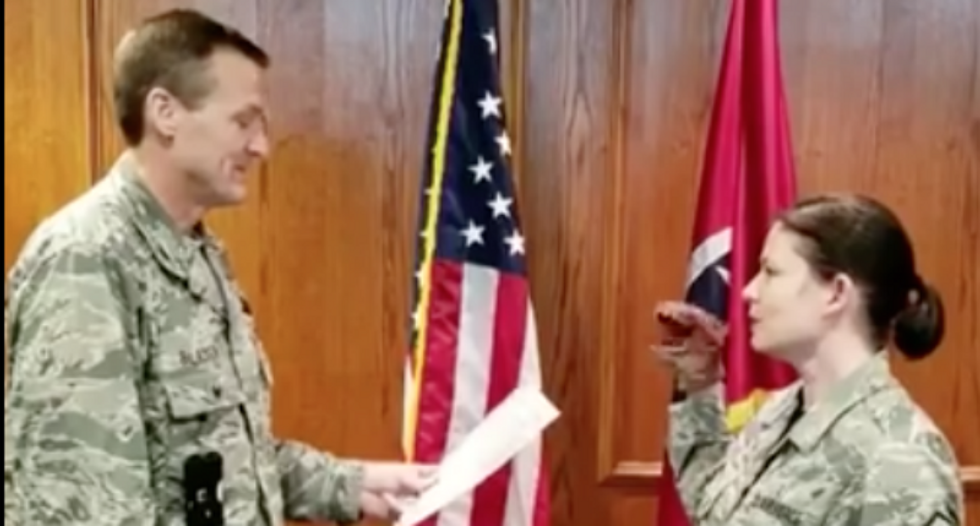 A colonel with the Tennessee Air National Guard has retired after being stripped of his rank over his role in a viral video featuring a dinosaur puppet and a re-enlistment ceremony.

The Air Force Times reported Wednesday that both an unidentified colonel and Master Sgt. Robin Brown were sanctioned after a video showed Brown using a dinosaur puppet during her ceremony. The colonel was demoted and immediately resigned, while Brown was removed from her full-time job and is facing further administrative action. The unidentified Tennessee Air National Guardsman who recorded the ceremony was also "removed from his job as unit first sergeant and has been reprimanded," the report noted.

In the video, Brown recites her re-enlistment oath for her senior noncommissioned officer position while wearing the dinosaur puppet on her right hand. According to an official from the Tennessee Military Department, she "was trying to create something her younger children would enjoy."

The video was posted to an unofficial Air Force group with a caption bemoaning the lack of professionalism on display in the ceremony.

"Remember when the Profession of Arms was taken seriously?!?" the post published to the Air Force forum read. It also noted that more than 3 million people have watched the video.

"I am absolutely embarrassed that a senior officer and a senior NCO took such liberties with a time-honored military tradition,”Army Maj. Gen. Terry Haston, one of the leaders of the state Guard office, wrote in an announcement posted to Facebook. “The Tennessee National Guard holds the Oath of Enlistment in the highest esteem because that oath signifies every service member’s commitment to defend our state, nation and the freedoms we all enjoy. Not taking this oath solemnly and with the utmost respect is firmly against the traditions and sanctity of our military family and will not be tolerated."

You can watch the controversial ceremony below, via Facebook: