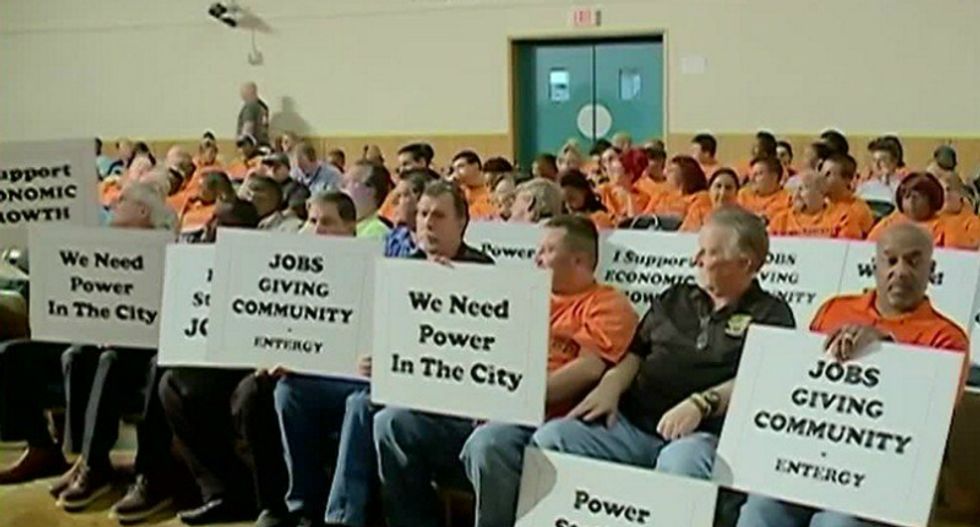 An investigation uncovering a company that pays actors to pose as activists takes the concept of "paid protester" from right-wing fever dream to reality.

The Poynter Institute highlighted the work of journalists at The Lens, a New Orleans news outlet that investigated orange shirt-wearing individuals who attended city council meetings about a slated power plant project — and discovered that they weren't what they seemed.

The nonprofit website reported that many of the people who attended those meetings in support of the plant project by the Entergy Corporation were hired by the Los Angeles-based company "Crowds on Demand."

"At least four of the people in orange shirts were professional actors. One actor said he recognized 10 to 15 others who work in the local film industry," Michael Isaac Stein of the Lens wrote based on interviews with actors and screenshots provided to the nonprofit outlet. "They were paid $60 each time they wore the orange shirts to meetings in October and February. Some got $200 for a 'speaking role,' which required them to deliver a pre-written speech."

Keith Keough, one of the people hired by Crowds on Demand for the Entergy meetings, told the Lens he was paid "every time someone said something against wind and solar power."

The Lens also acquired what it believes is Crowds on Demand's non-disclosure agreement for actors that repeatedly tells them to "tell nobody you're being paid."

Along with the Lens' investigation, other New Orleans-based groups and individuals — including Michael Brown, an attorney for the city's Sierra Club chapter — delved into the backgrounds of the orange-clad protesters holding signs in favor of the Entergy plant that often showed up to council meetings in such numbers that others could not enter the chambers. They all reached the same conclusion as Brown: "there was something off."

When asked about the actors, Entergy initially denied they'd hired them and then blamed The Hawthorn Group, a public relations firm it had hired. An internal document revealed that Hawthorn appeared to instruct Entergy to deny the allegations, and called one paid demonstrator that went on the record "delusional or lying."

In light of the revelations, the New Orleans City Council is investigating Entergy's alleged use of actors at its meetings and may reconsider the contract for their latest power plant.