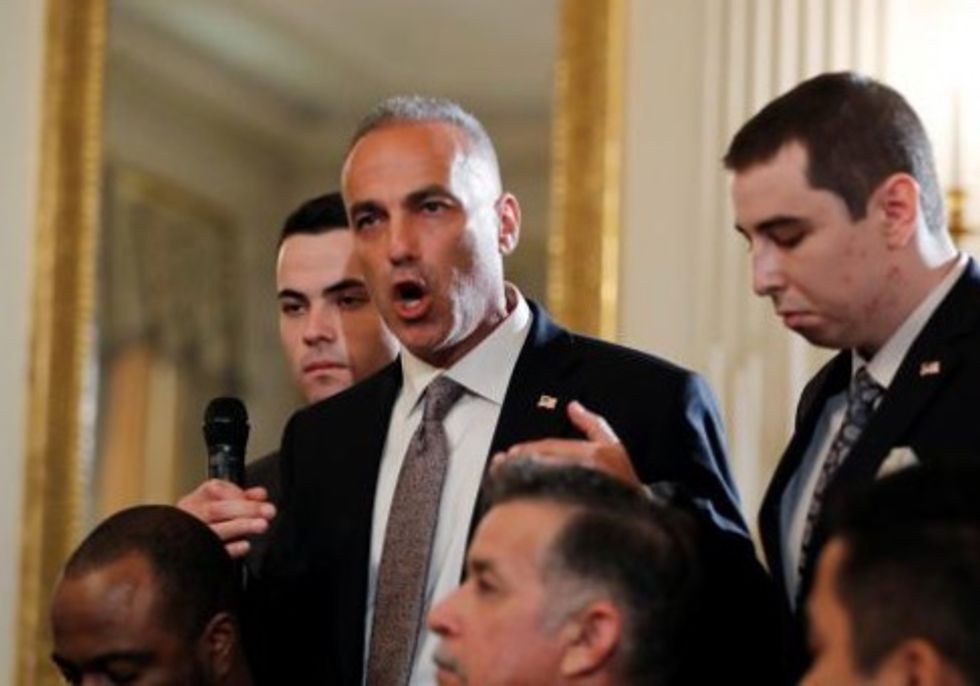 FILE PHOTO: Marjory Stoneman Douglas High School parent Andrew Pollack discusses the death of his daughter Meadow in the Parkland school shooting as he and his sons attend a listening session on school safety and shootings with U.S. President Donald Trump at the White House in Washington, U.S., February 21, 2018. REUTERS/Jonathan Ernst/File Photo

The father of a student killed during the Parkland, Florida high school mass shooting filed on Monday a wrongful death lawsuit against a former deputy sheriff who he accused of failing in his duty to confront the shooter, calling him a “coward.”

Andrew Pollack filed the lawsuit in a Broward County court on behalf of his late daughter Meadow, who was one of 17 people killed on Feb. 14 by Nikolas Cruz, a former student who opened fire inside Marjory Stoneman Douglas High School in Parkland, Florida, according to a court document.

The lawsuit accuses former Broward Sheriff Deputy Scot Peterson, who was an armed resource officer at the school, of failing in his duty to enter the building during the shooting.

Peterson instead hid between two concrete walls where he called dispatch multiple times for the school to be locked down, the lawsuit said.

“Scot Peterson did nothing,” the suit said. “... He let those innocent people die because he was a coward.”

Peterson’s lawyer Joseph DiRuzzo could not be immediately reached for comment.

DiRuzzo told the Sun-Sentinel newspaper in February his client had acted appropriately based on the belief that gunshots were coming from outside the school.

Other defendants listed in the suit are the estate of Cruz’s late mother, a Parkland couple who housed Cruz in the time immediately before the massacre and three mental health centers that evaluated and treated Cruz. The suit claims that the defendants failed to prevent the shooting.

Peterson, who had been assigned to the school since 2009, resigned in February rather than face suspension after an internal investigation was launched.

Broward County Sheriff Scott Israel has said that Peterson should have entered the school and killed the shooter.

After she was shot four times in the back, Pollack’s daughter Meadow crawled and laid on top of a freshman in a hallway. Cruz then shot and killed both, the suit said.

The suit seeks a jury trial and an unspecified amount of damages from eight defendants, including Cruz.

Peterson’s lawyer Joseph DiRuzzo could not be immediately reached for comment.

Monday’s lawsuit was the second suit filed on behalf of a victim of the Parkland shooting.

Earlier in April, the parents of Anthony Borges, 17, who was shot as he shielded others, filed a similar lawsuit. Borges is confined to a wheelchair for the foreseeable future and requires constant care, that suit said.

In the criminal case against Cruz that has 17 first-degree murder counts and 17 attempted murder counts, a Broward Circuit judge has yet to determine if he has enough funds to pay for his own defense.

Reporting by Brendan O'Brien in Milwaukee; Editing by Darren Schuettler