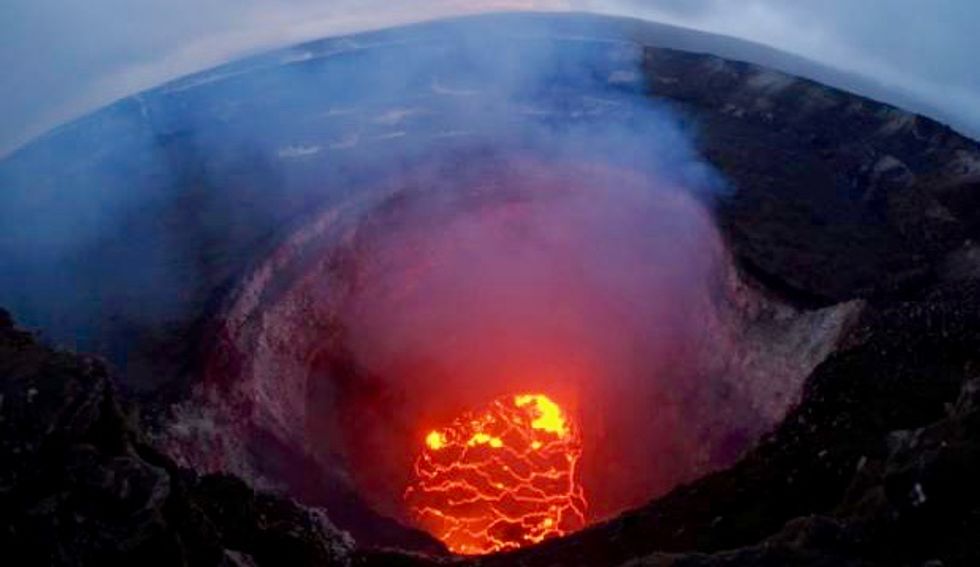 As a lava lake at Kilauea’s summit drains inside the volcano, magma is running underground. It could burst to the surface as large, fast-moving and intensely hot lava flows and produce higher levels of toxic gases, Hawaiian Volcano Observatory scientist-in-charge Tina Neal said.

Fifteen large cracks or fissures have opened on the eastern flank of Kilauea since the volcano erupted eight days ago. The volcanic vents have oozed relatively cool, sluggish magma left over from a similar event in 1955. Fresher magma could now emerge behind it.

In addition, Kilauea, one of the world’s most active volcanoes, threatens to begin a series of explosive eruptions within days or weeks that could form huge clouds of volcanic smog, or vog, and hurl boulders as big as small cars.

Geologists expect new lava outbreaks in or around the hard-hit Leilani Estates area in the southeastern Puna district, about 20 miles (32 km) south of Hilo, where 27 homes have been destroyed and all 1,900 residents have been evacuated.

Local residents got a text message alert at 11 a.m. on Friday warning them they could have little or no time to evacuate in the event of future eruptions.

“We are telling people to plan for the worst. They should have a Plan A, a Plan B and a Plan C,” said Roann Okomura, a county official who is helping run one of the shelters set up for evacuees.

“I GOTTA GET OUT OF HERE”

Ron Peters, 59, knew it was time to leave his home in the Opihikao community, 2.6 miles from Leilani Estates, when fruit trees and other vegetation began to die in the rotten-egg-smelling clouds of sulfur-dioxide gas.

“When you start seeing ferns go brown overnight, it’s like, ‘Wow, I gotta get out of here,’” said Peters, sitting at a Red Cross evacuation center at a sports center in nearby Pahoa.

His wife refused to leave and stayed to care for their dogs and chickens.

He went back for her on Thursday, fearing she and the animals would be dead. One of the dogs was having trouble moving but his wife was still alive. He set his chickens free.

“The gas fumes were just too much,” he said, sitting at a baseball diamond with his dogs tied beside him.

While locals contend with lava and gas on the ground, explosions at Kilauea’s summit some 25 miles (40 km) to the west were dusting communities with ash that irritated eyes and breathing.

South of Leilani Estates, in the Kalapana-Seaview neighborhood, residents are on high alert as the air quality is low and there are very few ways out of the area if an evacuation is ordered.

“There are some pretty level-headed, balanced people here who are trying to lead normal lives. But we also don’t want to be stupid,” said Cindy Hartman, 68, who lives in the Kalapana-Seaview neighborhood.

Volcanic smog may be blowing hundreds of miles from Kilauea, with people on the streets of state capital Honolulu, around 210 miles (340 km) northwest on the island of Oahu, complaining it was “very voggy” on Friday.