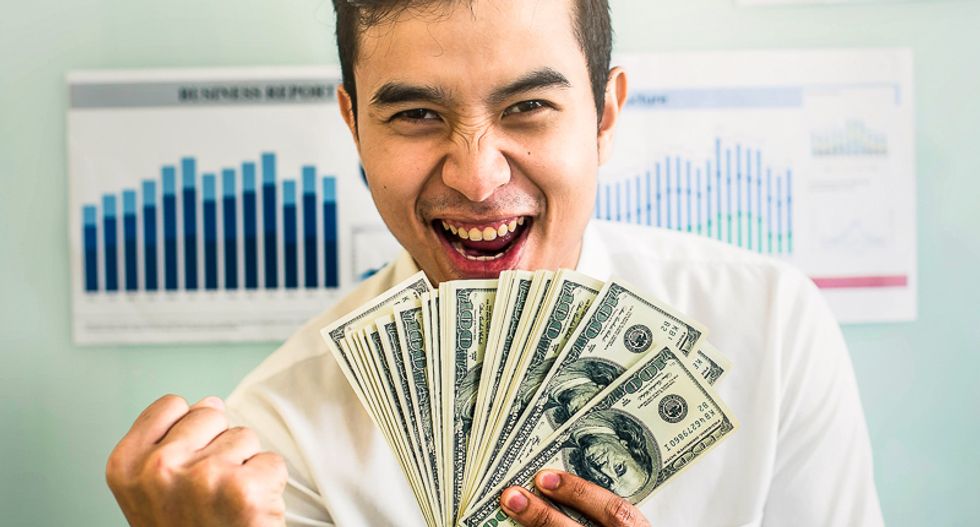 Happy businessman with money in hand, US dollar bills (Shutterstock.com)

In a widely cited confessional in the New York Times in 2014, former Wall Street trader Sam Polk outed himself as a recovering wealth addict.

He intimated a toxic childhood and an abusive parent (a common theme in the biographies of addicts).

He revealed the exhilaration (a well-known symptom of dopamine release) at the power that money provided him.

He admitted that he abused money like he abused alcohol and cocaine — to feel better about himself.

In the powerful throes of his deep addiction, his “fixes,” including cash bonuses, were never big enough. Like the “users” on Wall Street who fly into addiction-fueled rages, he would do anything, including bringing harm to others, to amass more cash. A typical addict, he didn’t care as long as he could have more.

Scientists are beginning to see the addictive link between dopamine and money, but we don’t have to wait for them to catch up. We know this is a problem. As I argue in this video, money is the most highly addictive substance on the planet:

It is a powerful addiction, unrivalled in its ability to trigger good feelings, and what’s most frightening about it is that you can’t ever physically overdose.

Cocaine, heroin and crack will kill you if you do too much, but not money. Money won’t harm you, physically anyway. The cash addict can madly mainline moolah from the trading floor, the Senate floor or, with smart phone in hand, the bathroom floor without ever risking a deadly OD. It would be comical if it wasn’t so tragic, yet it is very tragic indeed, for the addict, their families and society at large.

Money addiction as tragic as any other

Make no mistake about this. Like all addiction stories, wealth addiction is tragic. Like all junkies, cash junkies will do anything to service their need. They will certainly neglect their own families while they work long hours to make more.

To the outside world, everything will seem fine. They will “keep it in the family” as they dissemble, distract and confuse. They will buy nannies and ponies and cars. They will snort cocaine and go shopping and jet off to exclusive resorts to hobnob with other wealthy people. They will present their wealth fashionably, but as Sam Polk one day realized, the pain and anguish are real.

And it’s not just the neglected family that suffers. There are no boundaries. Like a fentanyl addiction, it takes over and distorts everything. Cash addicts in the U.S. government (in any government, really), their campaigns funded by the wealthy, will steal from the poor, destroy the environment, rip off sick children, engage in colonial exploitation, start wars and even sacrifice kids in yet another school shooting, if it means they can make some more bucks.

And that’s not even the worst of it.

The addicts will hijack human spirituality, exploit hatred, brainwash the masses, derail democratic politics and tinker with fascism in their desire to have more.

So what to do?

Well, as strange as this is going to sound, there might be a pill for all this. In a remarkable experiment in the journal Current Biology, tolcapone, a drug that prolongs dopamine feelings, made participants who took it rather than a placebo become more egalitarian about money. A magical cure seems all right to me. But even if you can’t get access to tolcapone, there are immediate things you can do.

See this problem for what it is: A loosely organized group of global addicts getting together to figure out ways to enrich each other financially. If you think this is about “draining the swamp” and jobs for the people, you are gravely mistaken. It is about sidling up to the troughand gobbling as much as they can, no matter how obscene it gets. It is about the “you scratch my back, I’ll scratch yours” service of globalized addiction. It is a serious problem, and we should all be concerned, because to the enabling addicts, everything, even a holocaust, is merely an “opportunity” for amassing more wealth.

Like any addict in the throes of their addiction, there’s no limit to how far this can go.

While there is still time, gently, carefully, take their big sticks and red buttons away. Don’t hurt them and punish them, because that’s what made these people sick to begin with. Instead, remind them of the illness that binds them, and get them the help that they need.

Don’t let yourself or the ones you love become like Sam Polk, “a giant fireball of greed.”

See the truth. Take some action. If you need it, get help.