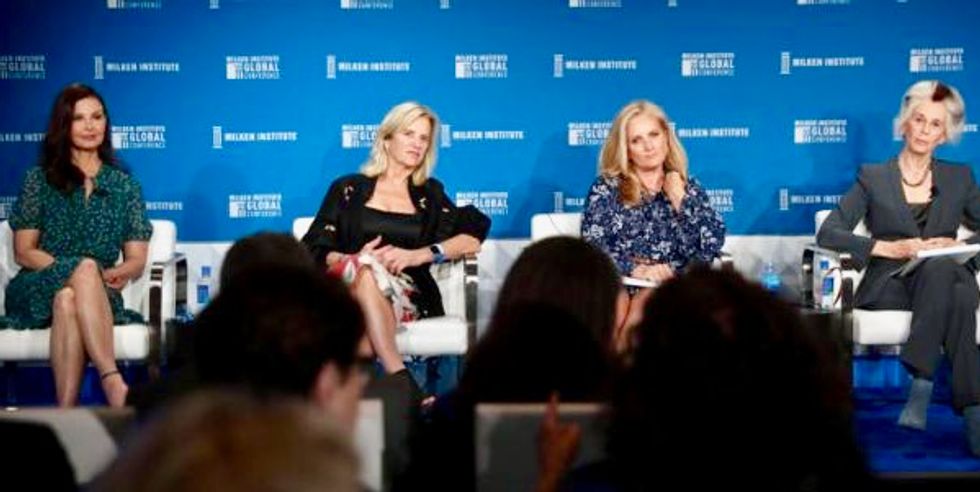 Women speakers at the Milken Institute Global Conference on Monday called for a new push for change in the corporate world and investing now that the #MeToo movement has spread to industries outside of Hollywood.

“Because women are systematically excluded from that role, they therefore don’t have the capacity to invest in the things that impact women,” said Kennedy, who was on a panel focusing on the future of the #MeToo movement.

Kennedy said a survey of the 30 largest U.S. university endowments showed that fewer than 1.1 percent of endowment dollars are invested by women and minority-owned firms.

“Ninety percent (of the endowments) are invested by old white men. Just look around this conference,” she said to laughter.

The global social media movement known through the Twitter hashtag #MeToo emerged following allegations of misconduct starting in October against Hollywood movie producer Harvey Weinstein, which he has denied. It has prompted a wider discussion about women’s rights globally, including issues such as the gender-pay gap.

Ashley Judd, one of the first high-profile actresses to accuse Weinstein of harassment and a speaker at the Milken conference,  said she wanted to highlight that sexual harassment of women “is an economic issue” because women’s paychecks are hurt when men retaliate against them, which hurts U.S. families.

Harvard Law School professor Catharine MacKinnon, a long-time researcher on gender equality, said that male leaders at companies can make a difference by not tolerating any sexual harassment and making it clear to all employees.

“I’ve seen heads of companies get everyone together and actually say, ‘We don’t do this here. You don’t come here to graze on the women’,” she said.

She added that in her early days of work on sexual harassment research, the issue would be dismissed.

“They used to say when we started out working on sexual harassment that actually, no this wasn’t sexual harassment, this was women sleeping their way to the top,” MacKinnon said. “And one day I said, ‘Well, there are almost no women at the top’, so apparently it doesn’t work very well’.”

Women hold 18 percent of board seats among MSCI World Index companies, according to an MSCI study published on September 2016.

She referenced Time’s Up boycott of R. Kelly, unveiled on Monday, which is agitating companies such as Ticketmaster, music streaming services such as Spotify Technology SA and Apple Inc’s Apple Music and record labels, to sever ties with the singer because of sexual assault allegations.

Kelly has denied the allegations.