'Mini-Trump' candidates battle it out in Republican primaries 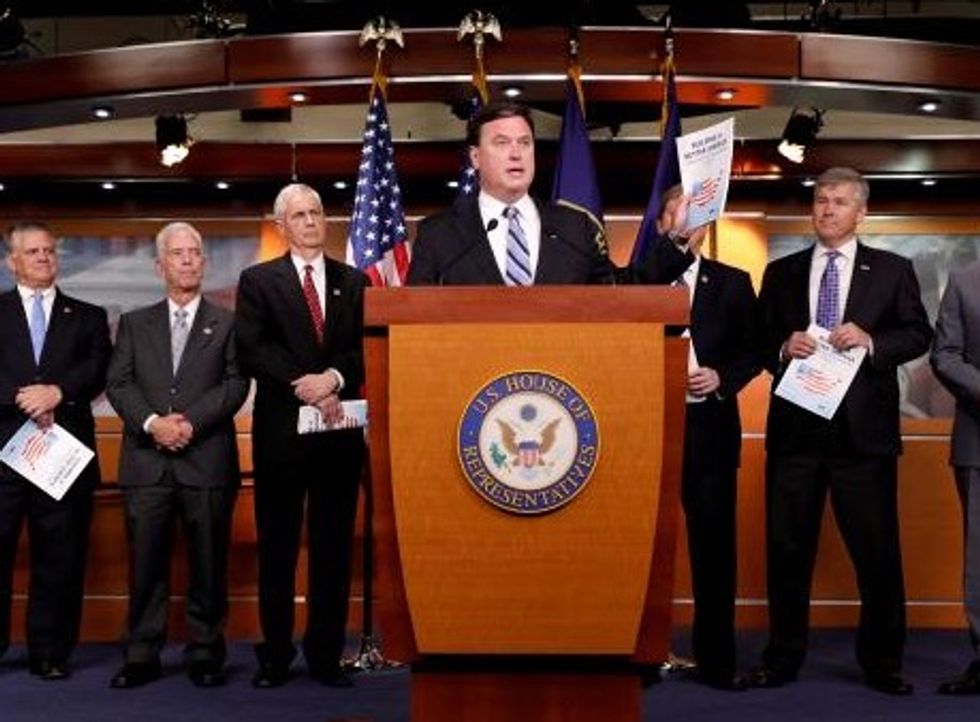 Mike Braun, an Indiana businessman turned politician, rails against Washington, says he speaks for disaffected voters, and uses his personal wealth to help finance his bid for public office.

Any similarity to President Donald Trump is entirely intentional.

Braun, who owns a distribution and freight company, says he would not have launched his Republican effort for the U.S. Senate if Trump had not blazed the trail two years ago.

“I thought there was the opportunity to define a different kind of candidacy, one from the outsider business world, the same thing Trump did,” he told Reuters ahead of the primary vote on Tuesday.

Other Republican primary races in Ohio and West Virginia on Tuesday also feature outsider businessmen who have gone all out to show their allegiance to Trump and accuse their rivals of lacking the same fealty.

The three contests herald a wave of primaries in the coming weeks in critical states such as Pennsylvania, California, Iowa, and New Jersey that will help determine whether Democrats can pick up two seats in the Senate and 23 seats in the House of Representatives in November to take control of Congress.

The candidates also highlight a shift in the Republican Party to embrace more populist, nativist and protectionist candidates skeptical of immigration and free trade – a seismic change from the party’s traditional alliance of social conservatives and free-marketeers.

How those Trump-like candidates fare in coming primaries and November’s elections will indicate whether “Trumpism” remains a dominant force in the Republican Party heading into the 2020 presidential election.

Blankenship served time in prison for safety violations connected to a 2010 disaster that killed 29 miners, and is viewed as the weakest choice to take on Democratic Senator Joe Manchin.

The other candidates in the race are U.S. Representative Evan Jenkins and state Attorney General Patrick Morrisey.

In Ohio, businessman Mike Gibbons is squaring off against U.S. Representative Jim Renacci to see who will challenge Democratic Senator Sherrod Brown in November. While Gibbons has played the Trump card, however, Renacci snagged the president’s endorsement.

To show how much he supports Trump, Gibbons, an investment banker, on Friday filed a defamation lawsuit against Renacci, alleging his campaign falsely claimed Gibbons is anti-Trump.

Indiana is home to perhaps the bitterest Republican primary in the country, with all three candidates scrambling to show voters their Trump bona fides and face incumbent Democratic Senator Joe Donnelly in the November election.

Last week, Rokita sponsored a resolution in the House demanding that Special Counsel Robert Mueller end his investigation unless he can show evidence that Trump’s campaign colluded with Russia to influence the 2016 election.

And the third candidate, U.S. Representative Luke Messer, nominated Trump for the Nobel Peace Prize for his role in the talks between North and South Korea.

“This is just the start of what President Trump can accomplish if he has the leaders that support him in Washington,” Messer told Reuters after a campaign event in Carmel, Indiana.

Braun’s campaign has labeled Messer and Rokita “swamp creatures” for the 12 years combined they have spent in the House. Trump often promises supporters he will “drain the swamp” in Washington, referring to career politicians and lobbyists.

Kyle Kondik, an analyst at the Center for Politics at the University of Virginia, said Messer and Rokita “are going out of their way to be pro-Trump in almost cartoonish fashion ... It’s kind of shameless.”

He said Republican voters likely will respond well to Braun’s lack of political experience but it is unclear whether he would be the best candidate to defeat Donnelly, considered to be among the most vulnerable Democrats in the nation.

Donnelly won his first term in 2012, when Democrats swarmed to the polls to re-elect President Barack Obama. He faces a far tougher challenge after Trump won Indiana by 19 percentage points in 2016.

Messer says Braun is flawed, pointing to his history of voting in Democratic primaries and suggesting he is not a reliable conservative.

Braun says he voted in Democratic primaries in the past because in his southern Indiana home Democrats held all the local offices.

He positions himself as in sync with the conservative Tea Party movement and has poured about $5.4 million of his own money in the race, according to federal records. Trump spent about $65 million of his own funds during his campaign.

Kondik said that Braun, as an unknown quantity, carries the most risk for his party against Donnelly, but he might also be able to bring in independents turned off by the other two conservatives.

“He has the most variance between risk and reward,” he said.