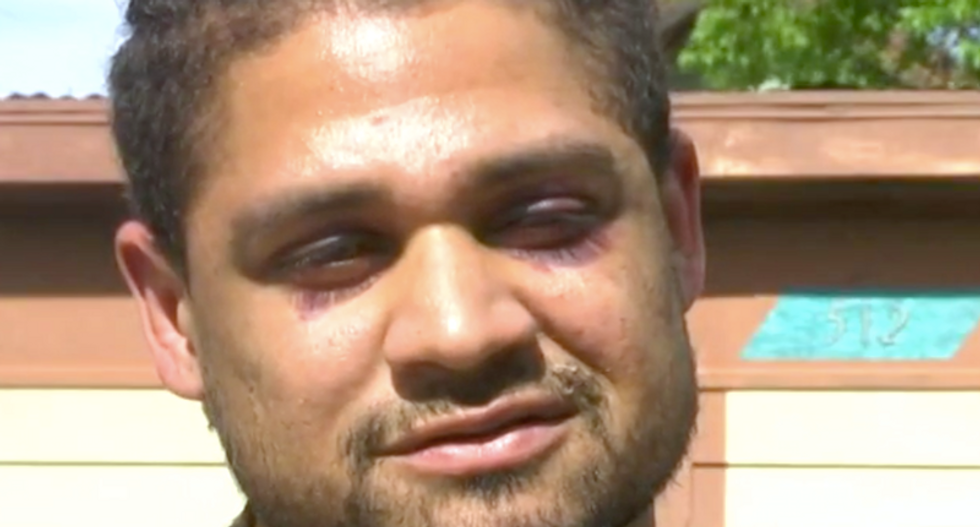 A pair of New Mexico college students say police racially profiled them before violently arresting them.

Police spotted a car around 3 a.m. Saturday that they believed matched the description of a possible drunken driver's vehicle, and the Highlands University student connected to the car started arguing with officers, reported KOB-TV.

A third student, Sir-Devonta Stewart, pulled out his cell phone and recorded video of the incident because he feared for his friends' safety.

"You're not supposed to defend yourself against them, so all I could do was sit on my property and record and try to help my friends to the best I could," Stewart said.

Santos suffered bruises on his body from the bean bags, and Lipnosky suffered two black eyes and was unable to see out of his left eye when he was booked into jail.

"It was wrong, and what they did to my friend, it was wrong," Lipnosky said.

Santos and Lipnosky were each charged with battery upon a peace officer and resisting arrest.

The police report claims the two students were belligerent and confrontational and cursed at officers, and the deputy chief said the use of force appeared to be justified.

"If our officers are met with any type of opposition, resistance or violence, we are governed by our training, departmental policies and laws on how we handle these situations," said Kenneth Jenkins, the deputy chief of Las Vegas police. "Currently, this incident is still under investigation."

Lipnosky and his family moved to New Mexico from Sacramento, where they had known Stephon Clark -- who was gunned down by police while holding a cell phone in his own back yard.