WATCH: Officer grapples with black actresses for 'refusing to leave' a bathroom -- which led to their arrest 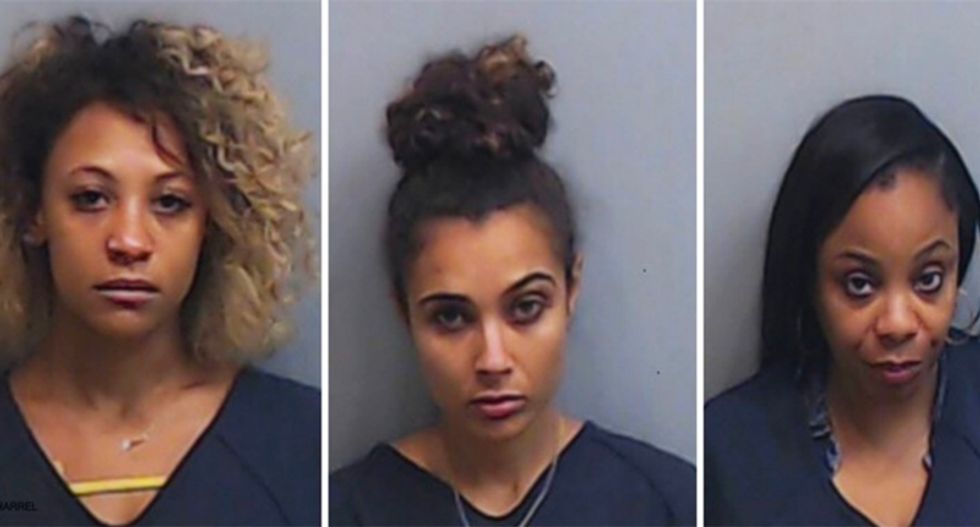 An off-duty Atlanta police officer is being investigated after being involved in an altercation with three actresses/singers at a local restaurant after the women dallied in the ladies room long after the establishment closed.

According to 11Alive, Brittany Marie Lucio, Asia'h Sharrell Epperson and Erica Walker entered Houston’s on Mother’s Day and went into the bathroom 30 minutes after the restaurant closed and as earlier diners were still finishing up in the main room.

The report states that a shift manager asked a local police officer, who moonlights at the restaurant as security,  to ask the women, who had already been warned twice, that they needed to leave after ten minutes when the altercation began.

The officer’s report states that he entered the bathroom, asked the women to leave, but was met with laughter as they stared at their phones.

The officer then grabbed Lucio by the wrist leading her to tell him, “Get your f*cking hands off me! You ain’t about to touch me,” before he grabbed her again as the action moved outside. The officer's report also alleges that Lucio punched him in the mouth causing a cut to his lip.

According to their Lucio's attorney, Gerald Griggs, the three women were profiled and he wants a full investigation from the Atlanta Police Department, as well as charges of criminal trespass dropped against all three of the women. As for the three women they are calling for a boycott of the restaurant.

In a statement, a representative for Houston's responded, saying, "We are aware of a complaint regarding an incident at our Houston’s Restaurant on Peachtree Road on May 13th and are in the process of investigating. The evidence we have seen thus far shows that three women arrived approximately 30 minutes after closing time, they went into the restroom as a group after being told that the restaurant was closed, the three stayed in the restroom for more than 10 minutes, and refused to leave despite repeated requests from several managers to do so. Eventually, an off-duty Atlanta Police Officer was summoned with whom one or more of the women got into an altercation that led to arrests. Based on our current understanding, we believe our managers responded appropriately to this unfortunate situation."

The report notes that Epperson is a former finalist on American Idol and an actress on the television series "Greenleaf," with Lucio also being described as an actress.

You can watch the video below that was posted to Instagram by their attorney:

#HoustonsWeSTILLHaveAProblem. Using the restroom #whileblack, Three black women attempted to use the restroom in the dining establishment and the police were called on them. Why were the women manhandled and arrested? Even after the recent events at #Starbucks, #Wafflehouse, and #Houstons, the Resturant chain responded the wrong way. #BoycottHoustons #blacklivesmatter #blackwomen I stand with @britt_lucio.