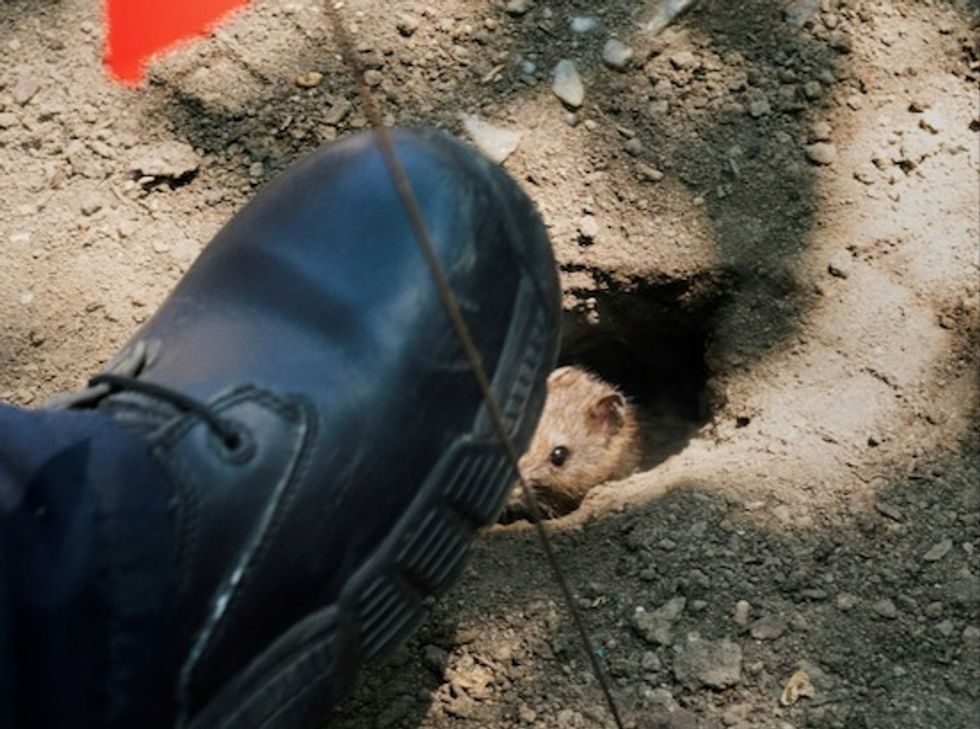 A snout and two little black eyes pop out from the hole, too late: A foot already covers them and the hole will be quickly filled with dry ice.

This new weapon in the hands of the New York City Health Department pest control team spells certain death for the rat.

Rick Simeone's team is at work in Sara D. Roosevelt Park on the Lower East Side, one of Manhattan's oldest districts.

The day before, they spent more than three hours locating all the entrances to the burrows, 67 in all. That means there could be more than 250 "rattus norvegicus," the scientific name for common brown rats, living there.

Burrow by burrow, the team drops into each hole several small pellets resembling ice cubes but which are actually dry ice, carbon dioxide in solid form.

The surrounding air temperature ensures that the carbon dioxide reverts to gaseous form and asphyxiates the rats, which are usually asleep at this time of the day.

Normally, 90 to 100 percent of the rodents are exterminated.

"You always hear that rats are winning the battle. But this turns it around."

Rats have made their home in New York since the middle of the 18th Century and are responsible for the transmission of numerous diseases.

A 2014 study published by a PhD candidate at Columbia University estimated about two million rats in the US financial capital, which has a human population of more than 8.5 million.

The rats are most often seen scurrying in the street or in the subway. A celebrated video posted on YouTube in 2015 showed a rat dragging a slice of pizza on the subway stairs.

They live an average of only six or seven months in the port city, but a female can give birth to as many as 100 baby rats each year.

In 2012, John Stellberger became the first to use dry ice against rats in the United States, based on an idea from one of his employees.

The head of EHS Pest Control company, Stellberger recalls that he spoke of the idea with sanitation officials in Boston, who conducted a brief trial in 2016.

That pilot was suspended after several months pending an approval by the US Environmental Protection Agency, which came in June 2017.

At the beginning of this year after several months of tests, New York officially adopted the dry ice technique, joining Boston, Chicago and Washington.

Dry ice is only used in open spaces including parks and green areas, Simeone explained, because it would be too complicated to identify rat tunnels in the streets or residential areas where concrete is everywhere.

Aside from its effectiveness, dry ice presents no risk to wildlife in parks and public gardens, unlike rodenticide which had previously been the only weapon deployed against rats.

The newer method, which costs about the same as poison, corresponds to the times, Stellberger explains. Many of his customers ask him to get rid of rats without cruelty.

Simeone says the rodents "sort of go to sleep" as they asphyxiate.

But dry ice alone will not resolve New York's rat problem, warns Simeone, as well as Robert Corrigan, the president of RMC Pest Management Consulting who is sometimes called the "Rat Czar" for his expertise in ridding the world of rodents.

In July, New York Mayor Bill de Blasio presented a major $32 million plan targeting rats and focused on the three most infected districts of the city.

The plan did not put dry ice in the forefront but rather the rats' access to food, which is the heart of the problem. Each pest needs about 80 grams (2.5 ounces) of food a day to survive.

Intelligent garbage cans, closed containers, greater frequency of garbage collection, and collaboration among different city services -- the program aims to put an end to the permanent pantry which New York streets have become for rats.

Corrigan, who worked with the Department of Health for 12 years, is pleased that authorities have finally chosen to tackle the question from a scientific rather than an empirical way.

"When I see a lot of rats on a block, instead of asking where should I put my poison, I ask: 'Who's feeding these rats?'," Corrigan said to illustrate this change in philosophy.

As Simeone says, "eliminate the garbage" and you no longer need poison.

PREVIOUS BACK TO SUMMARY
Please contact support@rawstory.com for customer support or to update your subscription. Report typos and corrections to: corrections@rawstory.com.