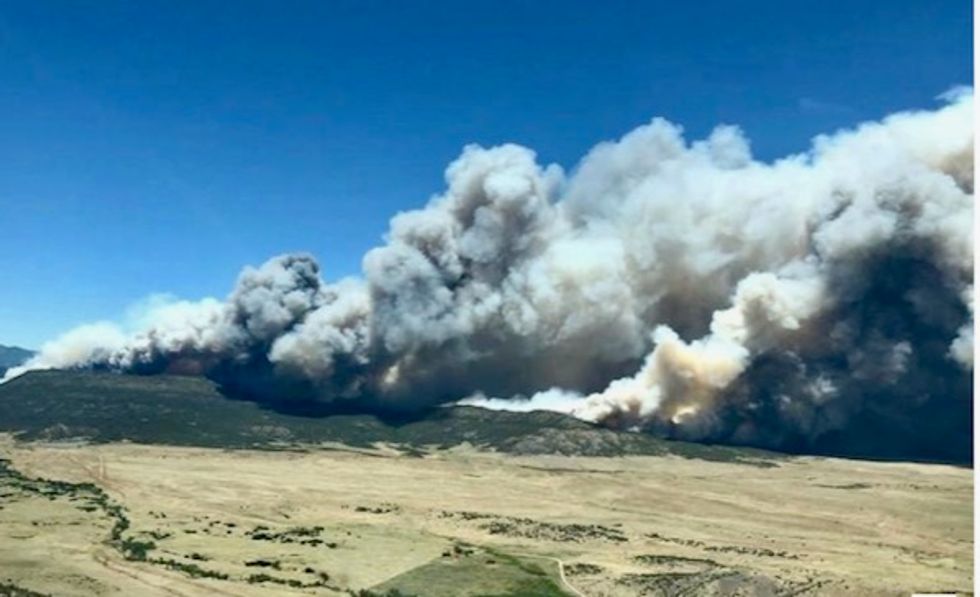 FILE PHOTO: Smoke is seen from a fire in this aerial shot above Cimarron, New Mexico, U.S., June 1, 2018 in this picture obtained from social media on June 2, 2018. Justin Hawkins/via REUTERS

Rains fell on two massive wildfires in the U.S. southwest but it was not enough to quench the fires that were burning through thousands of acres in New Mexico and Colorado early Monday, officials said.

“The rains came and we’re glad of it,” said Judith Dyess, a spokeswoman for the joint agency, South West Incident Management Team in New Mexico. “But it didn’t do it. We’re still burning out of control.”

“Overnight the fires calm down some, with the lower humidity,” Dyess said, “But we’re working around the clock.”

Progress was made, she said. The fires were 23 percent contained by early Monday in the larger of the two fires, the so-called Ute Park Fire in Colfax County, New Mexico.

That was a big improvement from the fire being zero percent contained early Sunday before the rains came, Dyess said.

It has already scorched some 30,000 acres near Cimarron, a town of about 1,100 people northeast of Santa Fe, according to a bulletin on the New Mexico Fire Information website.

About 300 structures were threatened in Cimarron, where officials issued a mandatory evacuation order on Friday.

The town lies just northeast of the Santa Fe National Forest, which was closed to the public indefinitely on Friday in a rare measure prompted by the heightened fire risk from prolonged drought.

About a dozen outbuildings went up in flames on an adjacent ranch, fire officials said.

The cause of the fire, which began on Thursday and has been burning through grassland and pine forest, is not known.

A second wildfire started on Friday about 10 miles north of Durango, Colorado, raging across more than 2,255 acres late Sunday and forcing the evacuation of about 1,500 people near the southern border of the San Juan National Forest, the U.S. Forest Service said.

Air tankers dropped a red fire retardant slurry at the weekend on land near the fire 10 miles north of Durango along Highway 550, according to the Denver Post. Six helicopters dropped large buckets of water on the flames.

The fire was 10 percent contained, according to a fire bulletin from the National Weather Service (NWS) early Monday.

“That’s it, what they got,” he said. “One and done. The rains have moved west into Arizona.”

Reporting by Rich McKay in Atlanta; Additional reporting by Brendan O'Brien in Milwaukee and Peter Szekely in New York; Editing by Paul Tait