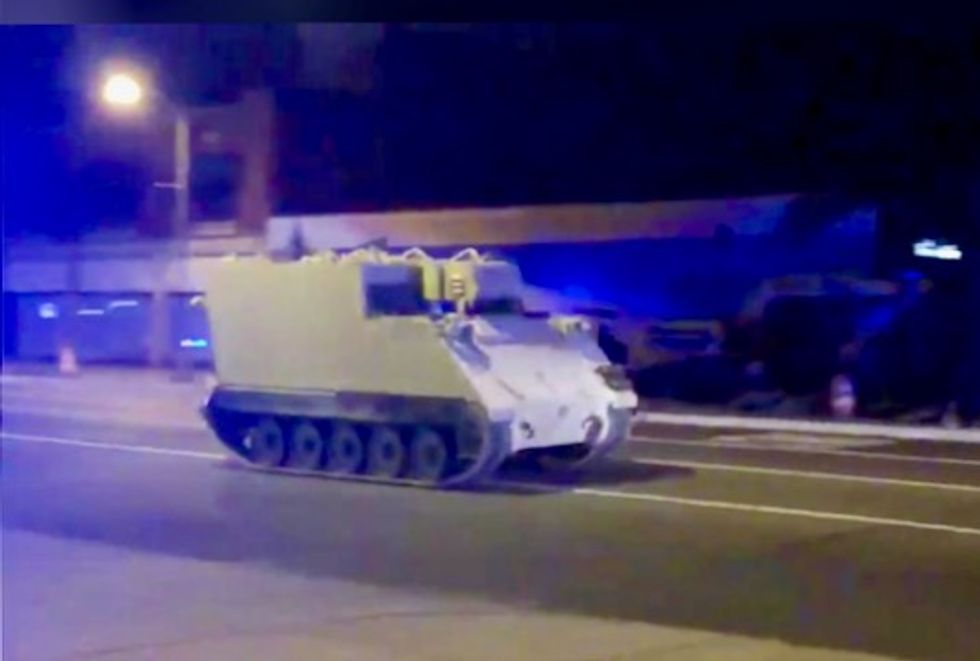 An armoured personnel carrier (APC), which was purpotedly stolen, drives along a street in Richmond, Virginia, U.S. June 5, 2018, in this still image taken from a video obtained from social media. Parker Slaybaugh/via REUTERS

A soldier stole an armored personnel carrier from a National Guard base in Virginia on Tuesday and took the vehicle on a two-hour drive that ended in a police chase through downtown Richmond, the state capital, state police said.

The unidentified man took the vehicle at about 7:50 p.m. from Fort Pickett, a Army National Guard base in Blackstone, Virginia, state police spokeswoman Corinne Geller said in an email to Reuters.

The suspect then drove the military vehicle, which was not equipped with any weaponry, east on Route 460 and then north into Richmond on Interstate 95 at about 40 miles (65 km) per hour, Geller said.

Once in Richmond, several police squads followed the armored personnel carrier, which travels on tracks similar to a tank, through downtown as it headed toward the Capitol building, the Richmond Times-Dispatch reported.

Capitol police officers with combat-style rifles guarded the entrance to Capitol Square as a police helicopter shined a spotlight on the vehicle and police worked to stop traffic, the newspaper reported.

“This is INSANE! Someone has hijacked a ‘Tank-like’ vehicle from Fort Pickett and just drove it by our apartment!,” Parker Slaybaugh, the communications director for the Virginia Speaker of the House, said on Twitter.

At about 9:40 p.m. local time, the driver drove the armored vehicle onto a median and was surrounded by police, ending the 60-mile (95 km) pursuit, the Richmond Times-Dispatch reported.

Police tased the suspect, who was identified as a military soldier, Virginia State Police spokeswoman Keeli Hill said during a news conference.

No crashes or injuries occurred during the incident, Geller said.

Charges are pending against the man, who was in state police custody, she said.

Reporting by Brendan O'Brien in Milwaukee; Editing by Darren Schuettler