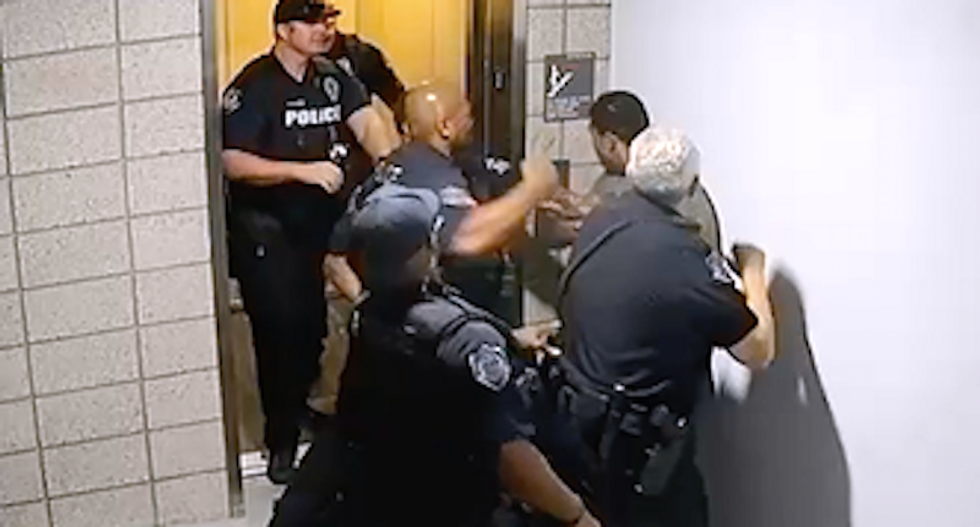 Four Arizona police officers have been placed on leave after they were caught on video beating a black man holding a cell phone during a domestic violence investigation.

The video recorded May 23 shows Mesa police officers approaching the man, identified as 33-year-old Robert Johnson, as he talks on a cell phone while standing near an elevator doorway on the fourth-floor balcony of an apartment building, reported The Republic.

Police had been called to the building by a woman who said her ex-boyfriend was trying to break into her apartment, and officers made contact with two men leaving the area.

The ex-boyfriend, 20-year-old Erick Reyes, was arrested on suspicion of disorderly conduct and suspicion of possessing drug paraphernalia.

The video shows officers approaching Johnson at the elevator, and they attempt to put him into a chokehold and then start punching him within seconds.

Multiple officers punch Johnson, who slumps to the ground, and they place him in handcuffs and zip-tied his feet before an officer shoves his head into the elevator door.

Johnson was arrested on suspicion of disorderly conduct and hindering.

Mesa police chief Ramon Batista said Tuesday that Johnson didn't follow orders to sit down, but he admitted the use of force didn't appear necessary.

The four officers were placed on leave while the encounter is investigated, and Batista said he decided to release the surveillance video before it surfaced online.

It's not clear whether officers detailed the use of force in their report, which haven't been made public yet.

"The misconduct of these officers would have gone unnoticed if it had not been captured by surveillance videos at the apartment complex where the assault occurred," said Johnson's attorneys in a statement. "We hope and pray that the Mesa Police Department will accept responsibility for the misconduct of these officers. Mesa must take concrete steps to ensure that culpable officers are disciplined, retrained, or dismissed."