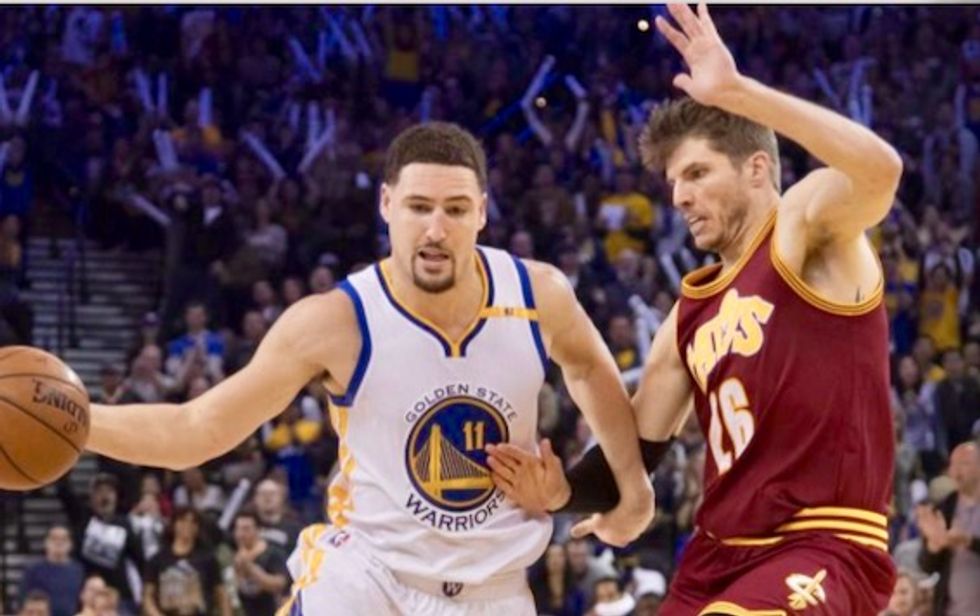 Klay Thompson scored a game-high 26 points and Draymond Green recorded an 11-point, 13-rebound, 11-assist triple-double, propelling the Warriors to their first win over the Cavaliers since Game 4 of last year’s NBA Finals.

The triple-double was the third of the season for Green. He also blocked five shots.

The Cavaliers, swept by the Warriors in two games in the regular season last year and down 3-1 in the Finals, rallied to sweep the final three games en route to their first-ever NBA championship.

Cleveland extended its winning streak to four with a 109-108 home win over the Warriors on Christmas Day.

Golden State (35-6) took control immediately in the latest rematch, getting a layup from Stephen Curry, a 3-pointer from Thompson and a dunk from Kevin Durant in a 7-0, game-opening burst that prompted a Cavaliers timeout just 93 seconds into the game.

The Warriors led 37-22 after one quarter, then turned the game into a blowout over the final 3:31 of the second period, using an 18-3 flurry to open a 78-49 halftime advantage.

Durant had seven points and Curry six in the runaway.

The second quarter included a flagrant-foul charge against Green for leveling LeBron James on a fastbreak.

Green was suspended for the pivotal Game 5 of the Finals last June because of the accumulation of technical and flagrant fouls, including one during a Game 4 run-in with James.

James finished with a team-high 20 points for the Cavaliers, who were completing an 11-day, six-game trip. Cleveland (29-11) split the six games, also losing at Utah and Portland.

James missed 12 of his 18 shots and three of his four 3-point attempts.

Kevin Love had only three points and three rebounds in 16 minutes for the Cavaliers before sitting out most of the second half with a sore back.

Durant totaled 21 points, Curry 20 to go with 11 assists, Andre Iguodala 14 and Shaun Livingston 13 for the Warriors, who ran their record this season to 13-1 against Eastern Conference teams with a fourth consecutive win.

Kyrie Irving had 17 points despite 6-for-19 shooting, Iman Shumpert had 15 points and nine rebounds, and Kyle Korver and Richard Jefferson added 11 points apiece for the Cavaliers, who return home to host the Phoenix Suns on Thursday.

Cleveland, which took its most lopsided defeat of the season, shot just 35.2 percent from the field and 26.5 percent from 3-point range.

The 126 points allowed were the most this season for the Cavaliers, who saw all six of their opponents on the trip score 100 or more.