WATCH: Man caught on video destroying homeless person's encampment and throwing it into the lake 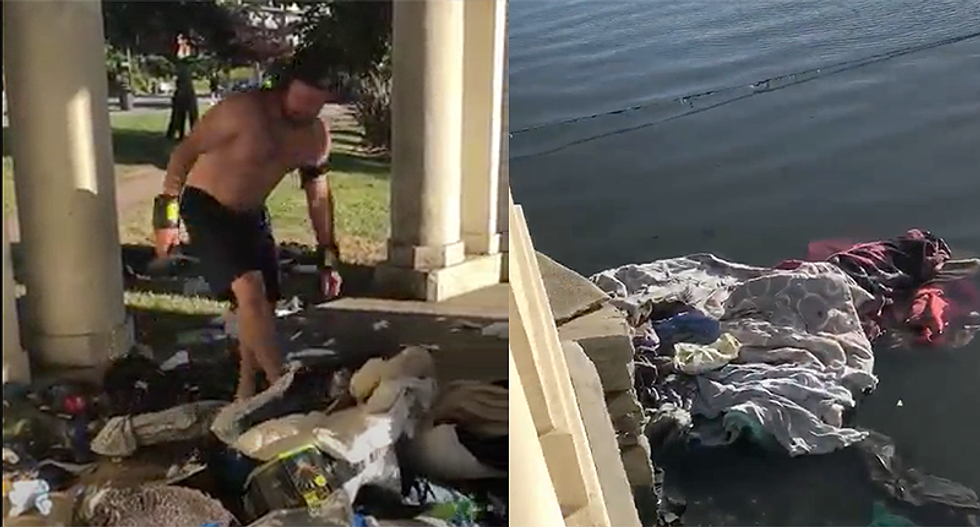 A jogger was caught on video completely destroying a homeless person's encampment on Lake Merritt in Oakland.

The incident was witnessed by JJ Harris, who posted the video to a Facebook group for lake neighbors, SFGate reported.

"I was definitely distraught. I was sad about the whole situation and angry," Harris said.

He explained he was enjoying some downtime before heading inside to watch the Warriors game when he saw the man throwing belongings into the lake.

The video shows the shirtless jogger gathering up the belongings and dumping them into a nearby trashcan. Those watching begged with him not to do it and be more empathetic.

"Sir, I think you should stop," one person could be overheard saying.

"You just threw it in the lake," another said.

The shirtless jogger said that it was an accident.

They persisted, attempting to reason with him. They explained the homeless person was well-known to the community and had been living in the spot for a while. The man kept throwing the things in the trash.

"He ignored everyone and then put his headphones back on and ran off to the north part of the park," Kristin Gallup recalled. She filmed the aftermath of the incident and also uploaded it to the neighborhood group.

She explained that the man who lived there always kept the area neat and off of the footpath.

"And he just f**** demolished this homeless guys camp," she continued.

"I think it's morally reprehensible and straight-up cruel what this guy is doing," she said in an interview with SFGate. "This whole incident is a pretty succinct manifestation of so many of Oakland's current issues—racism, gentrification, white privilege, male privilege, hatred towards poor and homeless people, lack of resources due to funds not being allocated properly, lack of consequences for unjustifiably bullying of homeless people, and sheer apathy towards their predicaments."

If Lake Merritt sounds familiar, last month a woman, who became known as "BBQ Becky," became famous after calling police on a black family having a barbecue there.

Since the video was uploaded and garnered local attention, resident Kenzie Smith mobilized the community to come together and donate items to the man.

Watch one video below: