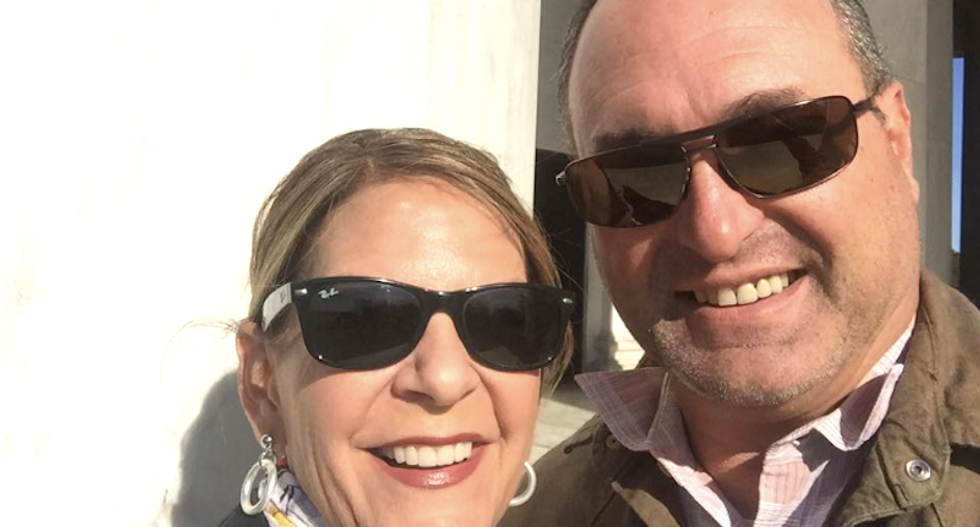 The candidate's husband in June 2016 called McCain a "senile old fart" who "loves illegal immigrants" and "thinks he can make it all okay by calling himself a 'war hero.'"

He tweeted in August 2016 that McCain was too "scared and frail" to debate his wife, whose primary challenge to the veteran senator focused on his age and health.

Kelli Ward, a former state senator, said last year after McCain was diagnosed with brain cancer that he should step down and she should be given his Senate seat.

She launched a bid to replace Sen. Jeff Flake, who announced this year he would retire from the Senate, almost immediately after losing a primary bid to McCain.

Mark Ward is heavily involved in his wife's campaign for the GOP nomination to replace Flake, and he frequently appears at campaign events -- sometimes on her behalf.

He has retweeted posts promoting conspiracy theories about the murder of DNC staffer Seth Rich, and Ward has also promoted baseless claims about killings allegedly ordered by Bill and Hillary Clinton.

Several of those retweets were content posted by actor James Woods, an outspoken conservative, and he slurred Hillary Clinton as "Killary" and Muslims as violent rapists.

A spokesman for Kelli Ward's campaign defended her husband by praising his military service.

"Focusing on obscure details of Dr. Ward's social media activity rather than his impressive profile as a emergency physician and decorated 33-year Air Force veteran is ridiculous and shows exactly why the mainstream media is losing all credibility," said campaign spokesman Zachery Henry.

This article was originally published by The 19th.

Nearly one in 4 parents reported last year being fired from their jobs due to the continuing breakdown of child care for their kids, according to a new study published Thursday. It’s just the latest statistic in a crisis that is exacting a costly toll not only on families, but also on the economy: The report puts the price tag for the lack of access to affordable child care at $122 billion in 2022 due to lost wages, productivity and tax revenue.

Man had racist meltdown after nearly running over woman who was walking her service dog: feds

A Washington, D.C. man has been found guilty of bias-related assault after a slur-spewing tirade at a Black woman he almost ran over while she was walking her service dog, said the Justice Department in a statement on Thursday.

Gueorgui Iskrenov's conviction comes after a three-day trial over an incident which occurred in 2020.