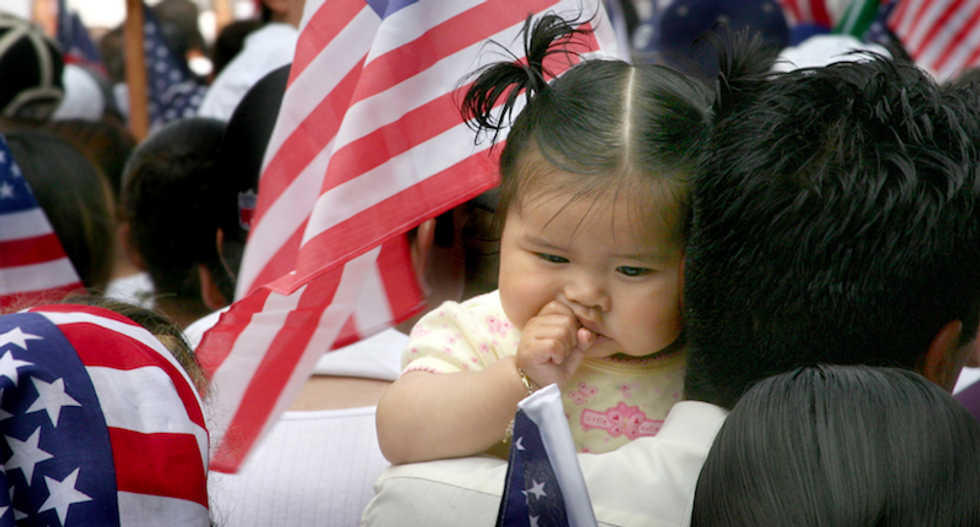 President Donald Trump has emboldened bigots across the country, and that includes many of his former staffers.

Now one of those former staffers, ex-national security spokesman Michael Anton, is pushing a tired, hateful and repulsive argument that would end a key feature of what it means to be an American.

In a new op-ed for the Washington Post, Anton argues for ending birthright citizenship. In particular, he thinks the Constitution only requires that authorized immigrants’ children be granted citizenship, and he argues this shouldn’t apply to undocumented immigrants.

He notes that the 14th Amendment defines citizenship: “All persons born or naturalized in the United States, and subject to the jurisdiction thereof, are citizens of the United States and of the state wherein they reside.”

The plain text seems to support the birthright citizenship practice. If you’re born under the United States an under its laws, then you’re a citizen.

But Anton argues, citing legislative debates by the drafters of 14th Amendment, that the phrase “subject to the jurisdiction thereof” is actually supposed to mean “not owing allegiance to anyone else."

It’s hard to make sense of the argument, though. As others have pointed out, it rests on dubious historical arguments and at least one misquote.

It also just strains common sense. The plain reading of “subject to the jurisdiction thereof” means “under the government’s laws.” That applies to nearly everyone in the country, perhaps with the exception of some diplomats. Arcane debates by dead legislators are hardly good grounds for undermining the plain reading of the text, especially when these debates refer to clauses that were intentionally left out of the text of the law. (They could have used the phrase "not owing allegiance to anyone else" in the law, had they wanted to.)

After all, constitutional amendments need to be ratified by the states — were all the legislators who ended up ratifying the amendment privy to the internal debates suggesting that phrases used in the legislation actually refer to entirely different phrases? These kinds of questions raise impossible challenges for people using “originalist” arguments to sufficiently answer.

Taking the Constitution at its word, Anton’s wish to exclude the children of undocumented immigrants from America raises a serious problem. People who entered the country Illegally must be subject to the country’s jurisdiction — otherwise, nothing they did would be illegal. So their children would certainly be citizens.

But is his proposal worth considering nonetheless? Anton tries to paint a terrifying picture of what birthright citizenship means:

This magnet attracts not just millions of the world’s poor but also increasingly affluent immigrants. “Maternity hotels” for pregnant Chinese tourists advertise openly in Southern California and elsewhere. Fly to the United States to have your baby, and its silly government will give him or her American citizenship!

Notice that there’s not actually any problem he notes here. Who is actually being harmed? What problem in the United States would his proposal fix? Is there some sort of crisis of ‘too much American citizenship’? Plainly no — and for what it’s worth, there’s been approximately zero net illegal immigration in the United States since 2007.

A major part of the problem of our history of illegal immigration is that we have so many people in the country who lack the benefits of citizenship, not too few.

At another point in the article, Anton argues that allowing the children of undocumented immigrants to have citizenship violates the social compact. He writes:

That compact’s scope and authority extend only to those who have consented to its terms and whose membership has been consented to by all other citizen-members. A compact that anyone can join regardless of the wishes of its existing members is not a compact.

But this is nonsensical. Citizens don't get to decide when other citizens have babies who then become citizens themselves. Under Anton's argument, that should be a referendum every time an American woman wants to have a baby.

The truth is this. Anton, like many Trump supporters, is a bigot. He’s written that Islam is “incompatible with the modern west.” He praised Trump’s efforts to reduce Muslim immigration to the United States. He also was an apologist for the anti-Semitic “America First Committee” that advocated staying out of World War II, as HuffPost reported.

Let’s be clear: The push to end birthright citizenship is the result of anti-immigrant and racist attitudes. And its success would only further disadvantage vulnerable people in our society.

“If the kids of unauthorized immigrants are themselves judged to be in the country illegally, it makes them and all their descendants subject to arrest and deportation by ICE - to a country they've never known,” argued writer Noah Smith in response to Anton’s essay. “Obviously most are not going to actually leave, since America is their home country. What we have then is a permanent underclass, deprived of basic rights, permanently on the run from the law, illegal residents of their own country.”

Anton believes Trump has the authority to end birthright citizenship by fiat. If he’s right, and no one stops the president, the country could become a much scarier place for millions of kids — for no good reason at all.