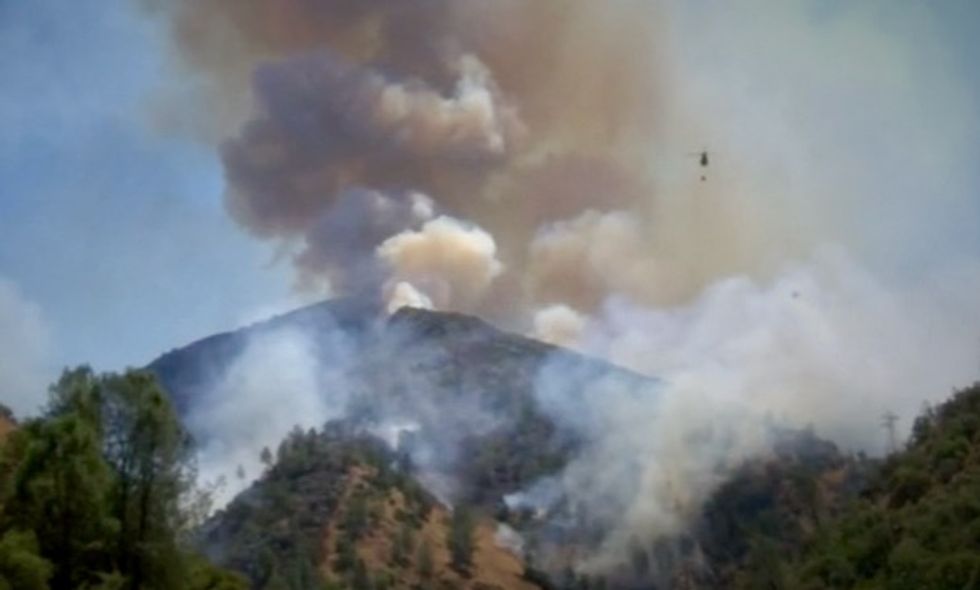 Reinforcements arrived on Thursday to engage a dangerous wildfire burning in steep, difficult terrain at the edge of Yosemite National Park in California that has already killed one firefighter and injured two others, fire officials said.

More than 2,000 firefighters were working to gain a measure of control over the Ferguson Fire ahead of thunderstorms forecast for central California this week.

“It’s a big safety concern if you have a big thunder cell building over a wildfire like this,” said Mike Whitaker of the California Department of Forestry and Fire Protection. “If that thunder cell collapses you get what’s called a downdraft, very fast-moving winds that can send your fire in any direction, 360 degrees, and obviously that’s very dangerous.”

Crews have struggled to build fire lines around the blaze, which broke out last Friday, because flames are burning in steep canyons that are difficult to access with heavy equipment.

Firefighter Braden Varney was killed on Saturday when a bulldozer he was using to cut a fire break overturned. Varney was the 10th U.S. wildland firefighter to die in the line of duty this year, according to National Interagency Fire Center data.

Earlier this week a firefighter broke a leg, requiring hospitalization, and a second was treated for heat-related illness.

Also complicating firefighting efforts was an inversion layer of thick black smoke that has drifted into Yosemite and prevented water-dropping aircraft from flying into narrow canyons. The fire was 7 percent contained on Thursday.

The United States is facing an unusually active wildfire year, with some 3.3 million acres already charred, more than the year-to-date average of about 3 million acres over the past decade.

In Oregon, high winds and arid conditions fueled the massive Substation Fire, a day after crews found a charred tractor and the remains of its unidentified driver, who was trying to clear brush in Wasco County.

More than 900 households in Sherman and Wasco counties have been told to evacuate immediately or to be ready to leave as the conflagration grew 40 percent to 50,000 acres (20,200 hectares) on Wednesday, fire officials said.

A Red Flag warning from the National Weather Service was in effect for the area because of forecast winds of up to 30 miles (48 km) per hour and humidity in the teens.

California has had its worst start to the fire season in a decade, with more than 220,421 acres (89,200 hectares) blackened and six major wildfires burning statewide as of Thursday.