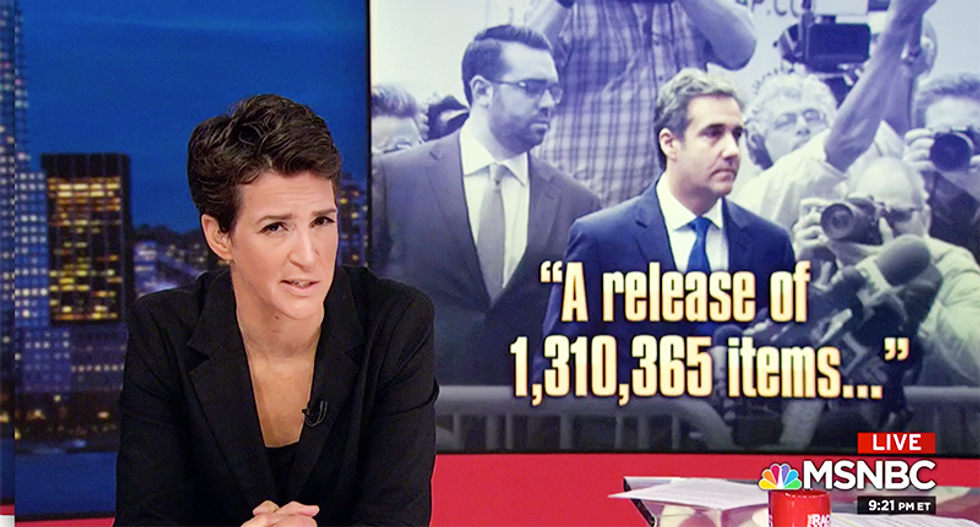 MSNBC's Rachel Maddow can't help but notice that President Donald Trump's lawyer and "fixer" Michael Cohen is following a pattern that she has seen unravel with other defendants caught up in the special prosecutor's investigation.

What is unfolding with Cohen seems to be following what happened previously to former Paul Manafort deputy Rick Gates. It also seems remarkably similar to Lt. Gen. Michael Flynn.

The host recalled it was announced on Thanksgiving Day 2017 that Flynn would cooperate with Mueller.

"Lawyers for Michael Flynn, President Trump's national security adviser, notified the president's legal team in recent days that they could no longer discuss the special counsel's investigation that they do no longer work on the case," The New York Times reported at the time.

Maddow explained that it was an indication that a plea deal was in the works, or that, at the very least, Flynn was cooperating. The agreement to share information between Flynn's lawyers, paid for by Trump, and the president's lawyers had been terminated.

The same happened with Rick Gates, who was initially charged with several felonies along with Paul Manafort as a group.

"Like Paul Manafort, Rick Gates initially started off fighting the charges," Maddow recalled. He pleaded "not guilty right out of the gate. A few weeks into it, after they started a whole new round of charges, Gates changed his mind. He dumped his legal team. Instead, he signed and he himself was a former federal prosecutor in D.C. where Gates is being charged."

She noted that when Flynn dropped his joint defense agreement it became a "big red flag that he was about to flip," she said. With Gates, it was the change of his attorney that served as an indication he too was about to take a deal. "He brought a new legal team on board and that was the warning that he would stop fighting the charges against him and instead would plead guilty and cooperate."

"It all happened pretty fast with Gates," she continued. "On January, we have the first report that Gates was getting this new lawyer. Exactly one month later on February 23rd, there's Flynn flipping."

Maddow also recalled an interview she did with former Director of National intelligence James Clapper, in which he explained that to his knowledge, everything that can be verified from in Christopher Steele's dossier has been verified. The dossier is also flooded with mentions of Cohen and his links between Trump and Russia.

Cohen spent the weekend speaking with ABC News reporter George Stephanopoulos for an off-camera interview that was rushed for reasons passing in understanding.

Maddow noted that the two questions Cohen refused to answer were whether Trump knew about the meeting at Trump Tower with the Russian lawyer and anything having to do with hush money for alleged affairs with Trump.