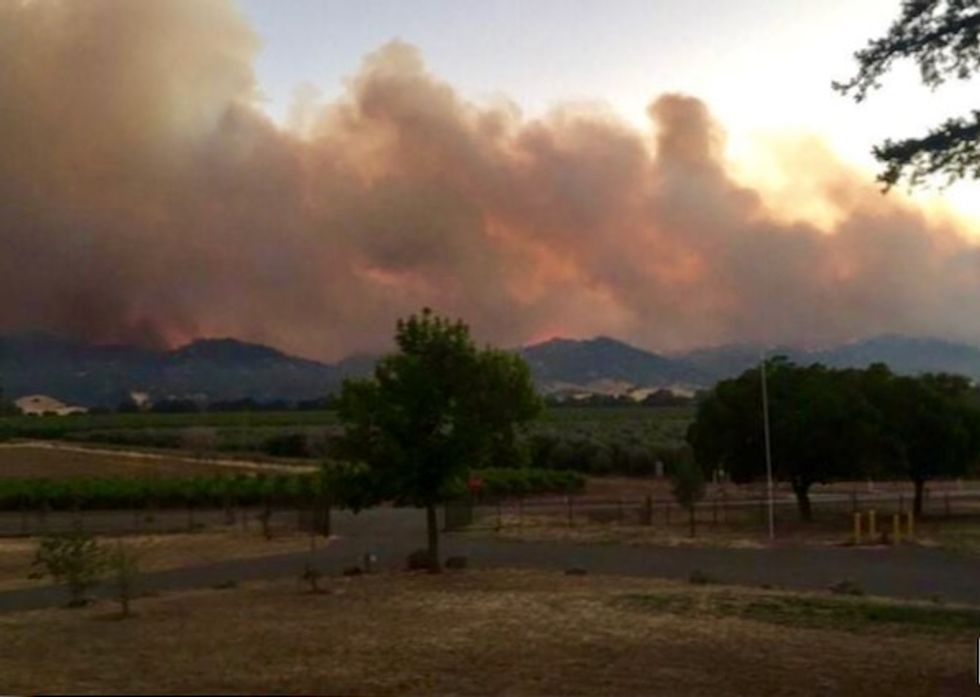 Smoke rises in distance from County Fire near County Road 63 and Highway 16 in Rumsey Canyon in this #CountyFire image on social media in Brooks, California, U.S., July 2, 2018. Courtesy California Department of Forestry and Fire Protection/Handout via REUTERS

A wildfire in Northern California remained unchecked on Tuesday as firefighters battled the blaze that threatened hundreds of homes and other structures, sending thick black smoke across the San Francisco Bay Area.

The County Fire, which broke out on Saturday afternoon in rural Yolo County, west of Sacramento, blackened more than 60,000 acres (24,280 hectares) of grass, brush and dense scrub oak. It was only 5 percent contained late on Monday.

The fire threatened about 700 homes, a local NBC affiliate reported, as authorities issued evacuation orders and advisories to hundreds of residents.

Scott McLean of the California Department of Forestry and Fire protection said on Monday the job of hand crews and bulldozer operators trying to cut containment lines was made more difficult by high winds, which were blowing embers and starting new spot fires.

“The potential for growth remains high as crews battle the fire in difficult terrain,” Cal Fire said in an advisory, noting that more than 2,000 firefighters were tackling the blaze.

The smoke reached about 75 miles (120 km) south to San Francisco, leaving films of ash on cars and windows. No casualties have been reported.

Wildfires have burned through nearly 2.5 million acres in the United States as of June 29, well above the average of about 2 million for the same calendar period over the last 10 years, according to the National Interagency Fire Center.

The agency forecast significantly above-normal large fire for July across the U.S. West.

Western Colorado, where six major wildfires have charred more than 100,000 acres, along with most of Utah and Eastern Nevada were under a Red Flag warning on Tuesday when wind gusts of up to 35 miles per hour, extremely low humidity levels and hot temperatures were expected, the National Weather Service said.

The largest blaze, the Spring Fire in southern Colorado, has burned nearly 61,000 acres, destroyed at least 104 homes and forced the evacuations of hundreds of residents, fire officials said.

The fire, which was human caused, is just 5 percent contained, according to InciWeb, a federal government wildfire website.