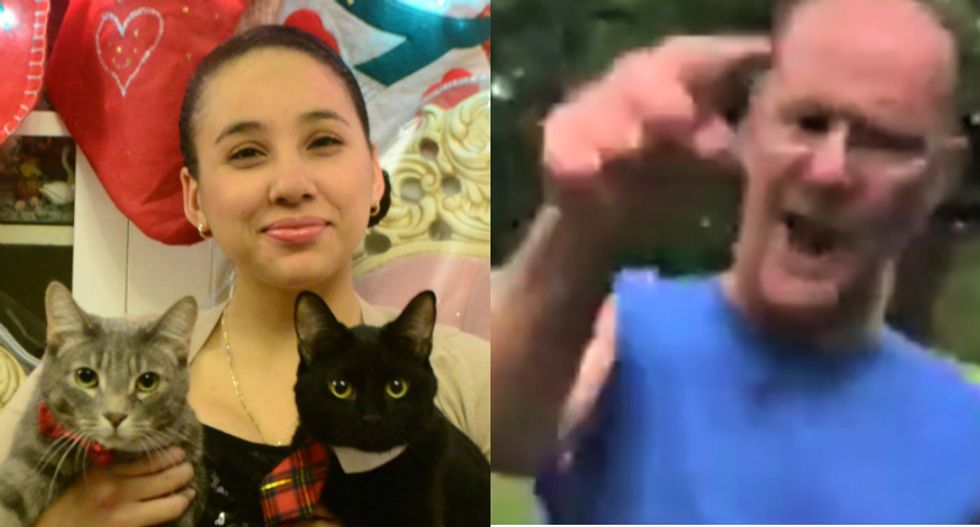 Mia Irizarry (left, via her Facebook) and the man caught on video berating her for wearing a Puerto Rico shirt (right, via screengrab).

A now-viral video depicts an angry white racist screaming at a Latina for wearing a Puerto Rico shirt — but according to the woman who recorded it, the shortened viral version fails to show the whole story.

In an interview with Latino Rebels, Chicago vet tech Mia Irizarry described the lengthy racist tirade directed at her that took place at a park on her birthday in June, as well as how the incident has affected her life since it happened and subsequently went viral.

Irizarry told Latino Rebels that she had a permit to use a specific shelter at the Caldwell Forest Preserve for a 12-hour time slot on June 14, and when she arrived, a group of three people — two men and a woman — were in her spot. She asked them to leave, and showed the woman her permit when she asked for it. One man and the woman began to move, but another man (who was later depicted in the video) refused to do so.

The man reportedly asked Irizarry if the flag on her shirt was for Texas, and she told him twice that it was for Puerto Rico, where she's from. He asked her why she was wearing it and became aggressive, reportedly standing up on the park table and screaming at her. As Irizarry began recording, park police were already at the scene of the incident — and had reportedly been called because the other man in the group choked a woman in a separate incident at the park, who later called the police.

As captured in Irizarry's video, the young woman asked the officer for help as the man approached her — only to be ignored. She later asked him again, also captured by the video, and was once again ignored. She told Latino Rebels that the video didn't capture how close the man was to her, or that the officer turned and walked away while ignoring her second request for help.

According to Irizarry, the officers stood around for 30 minutes after her 36-minute recording of the racist incident ended before arresting the man in the video and his friend. They then spent another half-hour in their squad cars before leaving.

While the officer was writing his report, Irizarry asked him why he ignored her.

"He’s a regular and doesn’t have a violent history," the officer reportedly replied.

The young woman said that actually experiencing racism of the sort that makes so many viral videos is very different than merely watching it online.

"When we watch these types of videos, we always say that we would react differently on how we would handle the situation," Irizarry said. "But in that moment, after calling for help, I realized that if I reacted aggressively, I would have been criminalized."

When asked if she'd changed since the incident, the young Latina said she had.

"I had never expected that something like that could happen to me," she said. "It’s definitely made me more cautious. But now I get to empathize with a new group of people."

After she complained to park police, Irizarry had her refund for her permit renewed. The officer who ignored her on camera is under investigation and reportedly on desk duty, and the young woman will face the man in her video in court on August 1, when he stands trial for assault and disorderly conduct.

You can watch Irizarry's entire, un-edited video of the racist incident below: