Striking out: why is black America turning away from baseball? 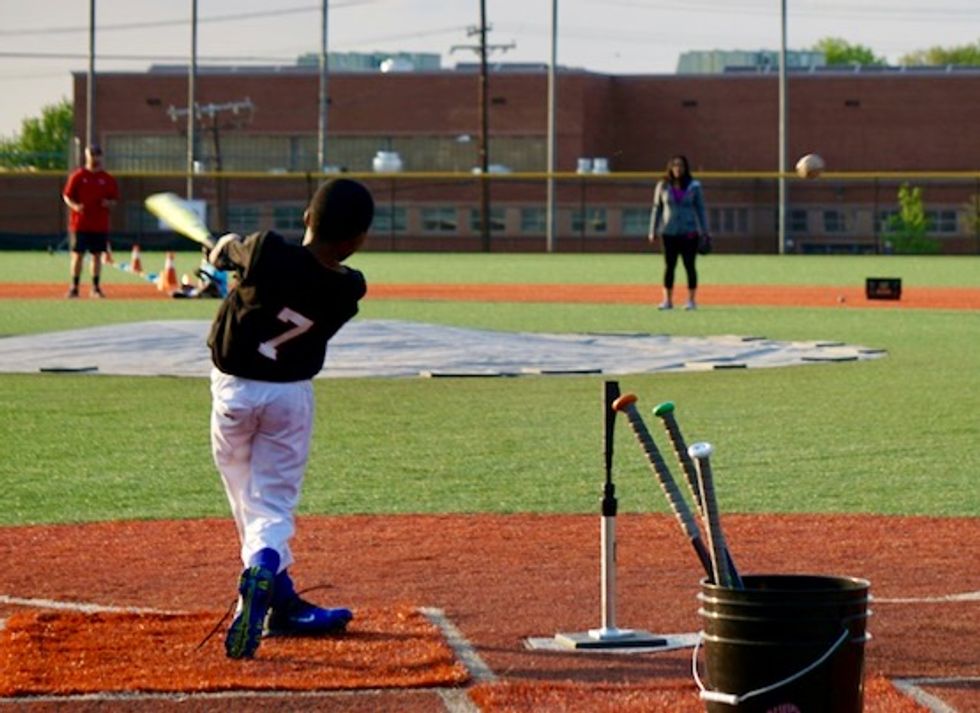 On a searing hot summer's day in Washington, a group of children are playing baseball at a pristine ballpark that stands at odds with its surroundings in the city's rough-and-tumble southeast.

Parents and grandparents shout encouragement from the stands as they chow down on hot dogs, some seeking shelter under the shade of a blue tent.

This quintessential scene is taking place in little leagues across the United States -- and would be unremarkable if it weren't for the stark color divide on the field.

Currently at bat is a team of 12-year-old African Americans representing Southeast's Mamie Johnson league -- named for the only woman to pitch in the Negro Leagues.

Their opponents from the affluent Northwest Washington league -- which has dominated area competition for decades -- are almost all white.

Mamie Johnson coach Neil Snell -- whose team wins easily -- is hoping his league, which was developed four years ago to help reverse baseball's precipitous decline among African Americans in the inner city, can change that calculus.

"Our vision was for our community kids to be playing baseball again," Snell says.

"It was something we wanted to build for our community -- keeping kids off the street, giving our kids opportunity to get a college education."

Across the nation, baseball is on the wane, in terms of participation, attendance and TV viewership, which is sharply down since the 1980s.

A recent Gallup poll showed basketball or American football ahead of baseball in terms of viewer preference and even suggested it could soon be passed by soccer in terms of what American sports fans want to watch.

The lack of interest in the African American community is stark.

Ever since the legendary Jackie Robinson broke baseball's color barrier in 1947, black players have been among the finest on the diamond.

By 1979, the World Series winning Pittsburgh Pirates had five black and one Latino stars among their regular starters -- still a record.

But from making up an average of 18 to 20 percent of starting lineups in the MLB during the 1970s and 1980s, black players only constituted 6.8 percent of the average starting team in 2016.

That is well below the percentage of blacks in the overall US population, at around 13.4 percent.

AFP / Eric BARADATNationals outfielder Bryce Harper -- shown here at practice -- is one of Major League Baseball's major stars, but also represents a trend: most of the sport's starting players are white

Keith Barnes, the president and founder of Mamie Johnson Little League, decided in 2015 it was time to do something.

A lack of powerful role models is a significant factor.

Children "will play the games where they see guys being marketed like LeBron James, Kobe Bryant," says Barnes, referring to the two basketball greats.

The Washington Nationals -- the capital's Major League team -- provide the use of their academy coaching staff and snazzy jerseys for the Mamie Johnson players.

Most other costs associated with the team are on the parents, which they meet through fundraising events.

Barnes began with just over 100 children, but has now tripled that figure in four years.

Last year, their 12-year-old squad became the first all-black team in 30 years to reach the finals of the DC championship, losing out to a team from Northwest that appeared in a championship game for the past eight years -- a big moment.

"This year we're hoping we can make it and win a championship," says Barnes.

AFP / Issam AHMEDBaseball requires a field, expensive equipment and a full team to enjoy -- lower-income children are sometimes shut out because of expense, but inner city leagues are trying to change that in cooperation with Major League teams

With games that last on average three hours and long periods of what some fans see as little action, baseball is having a hard time finding and keeping modern audiences.

"Baseball has a challenge in terms of kids wanting instant gratification, wanting something quick. And baseball is not quick. It's a game of time and thought," said Gregory McCarthy, vice president for engagement for the Washington Nationals.

Despite being singled out by coaches at the National's Youth Baseball Academy as a talented player, he sheepishly admits: "I like basketball more," citing the faster pace of National Basketball Association (NBA) contests.

Baseball is also increasingly seen as a primarily middle- and upper-class hobby, requiring a field, expensive equipment, and a full team to enjoy.

To be sure, "America's Pastime" isn't going anywhere anytime soon.

But some worry this masks a looming demographic crisis: the average age of baseball viewers is 53, compared to 47 for the National Football League and 37 for the NBA, according to Nielsen ratings released last year.

The World Series, baseball's championship, has seen its viewership steadily erode from its heyday 30 years ago, when more than 40 million Americans tuned in, to around half that figure last year.

The MLB is sitting up and taking notice, tinkering with the rules of the game to save time and create more action, as well as running community outreach events.

"Baseball is a way that we identify ourselves to ourselves and across generations and connect with people of prior generations whom we never knew," says John Thorn, the MLB's official historian.

"The challenge is not to see a declining trend and merely call it entropic and let it weave its way into the future: it is in the national interest and the game's interest to have African American participation," he adds.

McCarthy sees hope in the success of the Mamie Johnson players.

"Out of that team, two-thirds first picked up their first baseball at our baseball academy," he says.

"Those kids were alienated or did not know about baseball at all. They picked up a baseball under the Washington Nationals and several years later, they're a championship team."