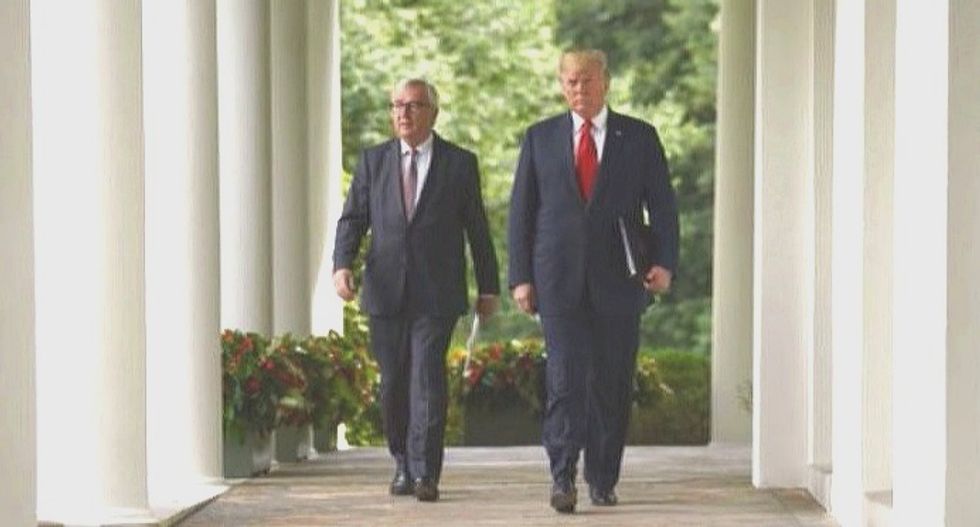 U.S. President Donald Trump and the European Union’s chief executive, Jean-Claude Juncker, agreed on Wednesday to work toward eliminating trade barriers on industrial goods, as Trump appeared to give ground on his threat to impose car tariffs.

The agreement to pull together a “high-level working group” to negotiate the tariff, subsidy and non-tariff barrier reductions could reduce fears of an escalating transatlantic trade war launched by Trump’s tariffs on steel and aluminum and a threat to impose a 25 percent tariff on imported cars and auto parts.

They also said they would cooperate to reform the rules of the World Trade Organization.

But Trump agreed to “resolve” existing U.S. tariffs on European steel and aluminum as well as Europe’s retaliatory tariffs against American motorcycles, bourbon and other products.

Juncker said that while negotiations were taking place on those issues, both sides had agreed not to impose new tariffs, including those threatened by Trump on autos and auto parts.

“As long as we are negotiating, unless one party would stop the negotiations, we will hold off further tariffs,” Juncker said. “And we will reassess the existing tariffs on steel and aluminum.”

The Commerce Department could recommend new tariffs as early as September after an investigation into whether car imports posed a risk to U.S. national security.

The two leaders did not specifically mention car tariffs in their statements, keeping the focus on other industrial products.

“We agreed today, first of all to work together toward zero tariffs, zero non-tariff barriers, and zero subsidies on non-auto industrial goods,” Trump told reporters at the White House.

The Commission briefed EU countries last week on the bloc’s possible response to car tariffs, saying in theory it could hit 9 billion euros of U.S. goods, according to EU sources.