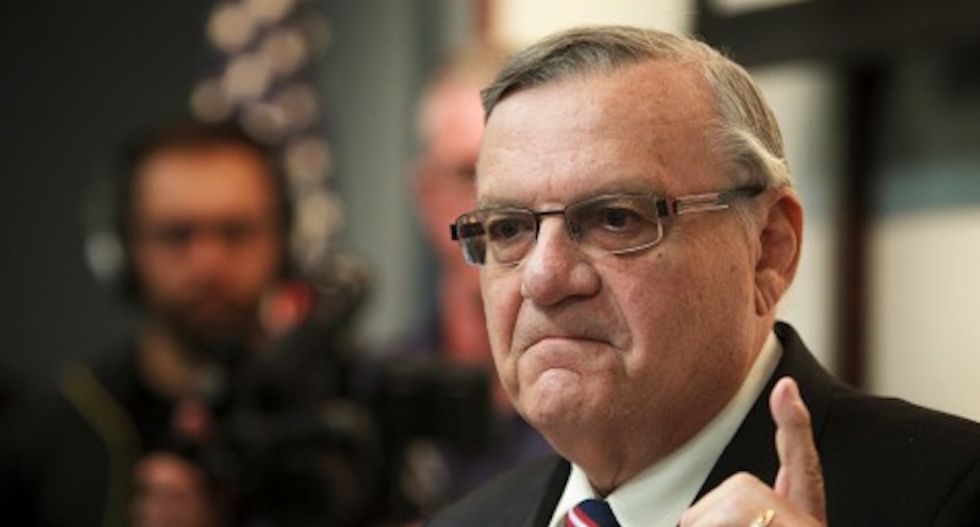 Joe Arpaio built a national reputation as a staunch opponent of illegal immigration while sheriff of Arizona’s largest county and found a powerful ally in President Donald Trump, who pardoned him last year after he ran into legal trouble.

But as the self-styled “America’s Toughest Sheriff” hustles for votes in Arizona ahead of Tuesday’s nominating contest for one of the country’s most competitive U.S. Senate races, analysts say his comeback bid is likely to fall short.

Every public opinion poll since June has shown Arpaio, 86, in third place among Republicans seeking the seat held by Republican U.S. Senator Jeff Flake, who is retiring after tangling with Trump over the past two years.

The other two candidates in the race - U.S. Representative Martha McSally and former state Senator Kelli Ward - have largely ignored Arpaio as they focus their attacks on each other. Trump has not endorsed anyone in the race.

“You’ve got a better chance of finding a leprechaun with a pot of gold at the end of the rainbow than you do seeing Joe win this thing,” said Republican pollster Mike Noble.

Republican activists accuse the former sheriff of playing the role of spoiler, splitting the conservative vote and boosting the chances of McSally, the more moderate candidate.

The lack of attention from his opponents and media outlets frustrates Arpaio - as does the spoiler tag, which he calls an insult.

“I’m known around the world,” he said in an interview on Sunday in Lake Havasu City, where he held a rally with about a dozen supporters. “You would think my opponents would go after me every hour on the hour. All they say is: ‘He’s a nice guy.’”

The victor in the Republican primary will likely face Democrat Kyrsten Sinema in a race that could determine which party controls the U.S. Senate after the Nov. 6 congressional elections. Gaining a majority would allow Democrats to stall Trump’s legislative agenda.

The death on Saturday of Republican U.S. Senator John McCain left a vacancy in the state that will be filled by a Republican appointed by Arizona Governor Doug Ducey.

During a 24-year tenure as sheriff of Arizona’s Maricopa County, Arpaio built a national reputation as a harsh disciplinarian who oversaw roundups of suspected illegal immigrants and forced prisoners to wear pink underwear and sleep in tent cities in stifling heat.

Arpaio was voted out in 2016, damaged by a series of judgments that left local taxpayers on the hook for $146 million.

He was found guilty of criminal contempt of court in 2017 for defying a court order that aimed to get his office to stop racial profiling, but he was pardoned by Trump before sentencing.

As a Senate candidate, Arpaio says he will support Trump’s agenda 100 percent. He has sought to address concerns about his age by promising he would only serve one six-year term.

Arpaio has struggled to articulate clear positions on issues like trade and foreign affairs. He has also had to explain an unflattering appearance on prankster Sacha Baron Cohen’s television show, where Arpaio debated gun rights with a toy doughnut and said he might accept oral sex from Trump. The candidate said later he misunderstood the questions.

He said his notoriety would command attention in the Senate.

“When I get there, I’ll go to the toilet, and I’ll have every TV camera in the universe - they all know me,” he told Reuters.

At his rally in the resort town of Lake Havasu City, Arpaio ate hamburgers with supporters sporting “Sheriff Joe” stickers. Several said they worried that illegal immigrants were crowding out U.S.-born residents.

“All my life I’ve had to live with illegal aliens and it’s not right,” said Donnell Cook, 70. “I’ve got seven grandkids that I worry about, and I get really choked up because I want them to be able to live free and find jobs. And now they’re not going to have that.”

Immigration remains a top concern for Arizona Republicans, polls show. But some voters said Arpaio was no longer the best candidate to tackle the problem.

“He’s old enough to be retired and staying home, or doing something else,” said Sally Kaizer, president of the Colorado River Tea Party, a grassroots group. “We’d prefer that he would back out, but he seems to want to stick to it.”