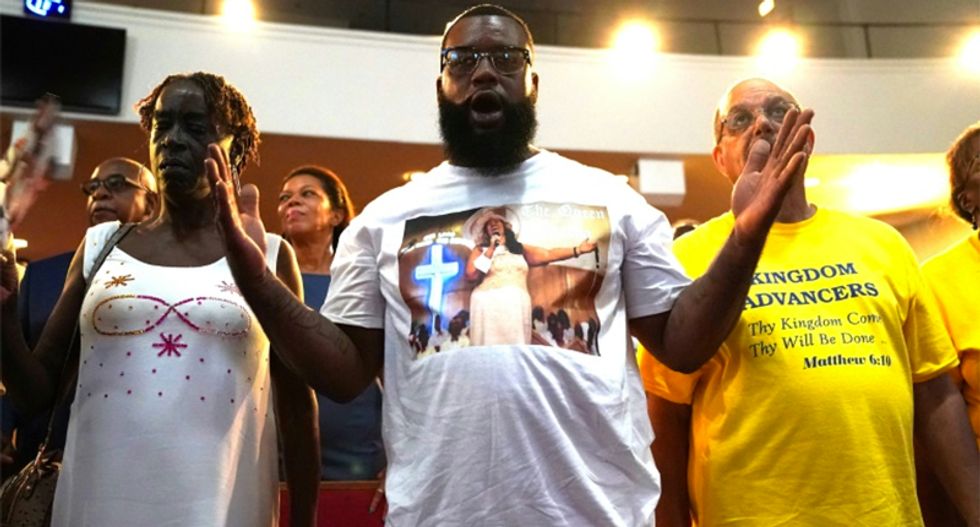 Fans have left balloons, flowers and other trinkets outside the New Bethel Baptist Church to pay their respects to the late Aretha Franklin (Photo: AFP/Timothy A. Clary)

Fans and worshippers celebrated the life of Aretha Franklin at her father's Baptist church in Detroit on Sunday, with her powerful voice again ringing out within its walls in tribute to her spectacular career.

Civil rights activist Jesse Jackson, greeted by a standing ovation, sent the several hundred parishioners into raptures with his eulogy and rousing prayers for his old friend, the "Queen of Soul."

The New Bethel Baptist Church -- located in a down-at-heel, quiet neighborhood of Detroit -- has been the focus of tributes to Franklin, who passed away from advanced pancreatic cancer on Thursday at age 76.

"Right now, the gospel choir in heaven has a lead singer. Detroit lost something, but heaven gained something."​

Franklin's recording of "Precious Lord (Take My Hand)" -- one of Martin Luther King Jr.'s favorite gospel tracks which she sang at his funeral in 1968 -- filled the church as a woman dressed in black and red danced.

The high-energy service was packed with music belted out by chief Pastor Robert Smith Jr.

"We are sad that Aretha has gone," Smith said. "We're happy that she's free from the shackles of time."

In his lengthy address, the now frail Jackson recounted Franklin's life in the context of the civil rights movement, from her birth into the segregation of the American south to singing at Barack Obama's inauguration.

Jackson, a Baptist minister and former Democratic presidential candidate, told the church that during the year of Franklin's birth "in a shack on the Mississippi River" in Tennessee, "225 blacks were lynched."

Her father, C.L. Franklin, was a prominent Baptist preacher and civil rights activist, who in June 1963 helped King organize the Walk to Freedom through downtown Detroit, only two months before King's historic March on Washington and "I Have a Dream" speech.

"I remember one time Dr King was facing bankruptcy... and Aretha did an 11-city tour and gave all the money to Dr King," said Jackson, who was a close aide to the slain activist.

"She was a rose that grew tall in a garden of weeds."

Franklin recorded the album "One Lord, One Faith, One Baptism" at the church, where she performed over the years, and also served dinners to worshippers and the homeless at Thanksgiving and Christmas.

Talking about his final visit with Franklin last Wednesday, Jackson told the church that he walked into the room calling out "Re, Re, Re."

"She opened her eyes and pressed my arms, and we began to pray," he said.

His eulogy had worshippers on their feet. Smartly dressed women raised their arms into the air and swayed to the music, as a few wiped away tears, with Jackson leading them in prayers and song.

Worshippers spilled out of the service, invigorated by what they called a celebration of the music icon's life and legacy.

"It was beautiful and it spoke to all of us," said Denise Redmon, a 57-year-old Indiana bus driver on a weekend coach trip to Detroit.

"I thought it was excellent. A mighty tribute to the Queen," agreed Esther Birden, 60, on the same two-day "Aretha Franklin soul weekend, joining in all the festivities and being a part of history."

"I remember listening to Aretha when I was eight years old and dancing to her music," she said.

"We have nothing to be sad about because she gave us so much. She gave us secular, she gave us gospel, she gave us opera... and you don't find too many that can fit in every arena like that."

He recalled how she had once called to complain about a relative who had been mistreated by the police department, telling him that no one -- regardless of their family -- should be treated in such a way.

"There's something about when the queen calls," he said, hailing her as a "freedom fighter" and "demanding justice for everybody from the back row to the front pew."

He said the revival of the Motor City -- the home of the US auto industry that has turned a corner after years of economic depression and high crime -- was "on the back of the spirit of the Queen of Soul."

"Aretha Will Always be My Queen. Nothing But Respect!!" read one home-made poster adored with cut-out, black-and-white newspaper pictures of the musical icon in her prime.