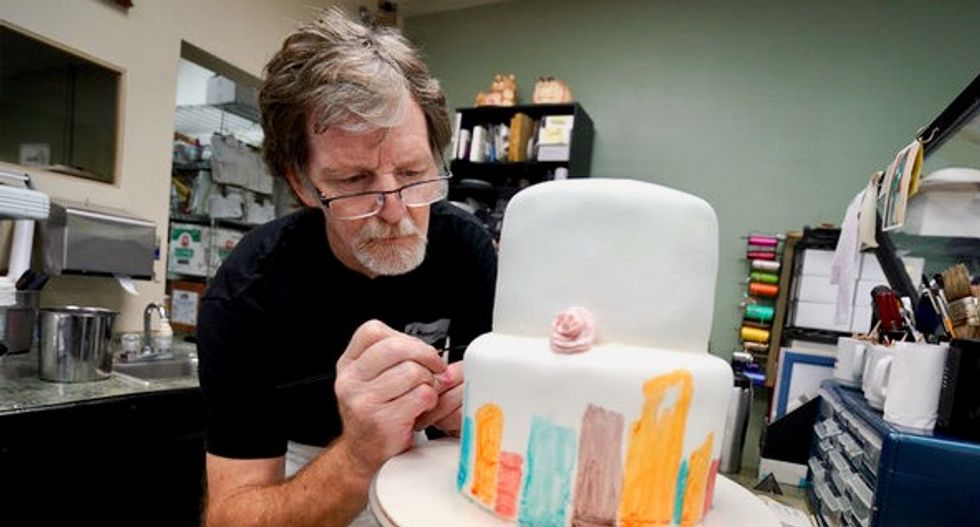 A Colorado baker who won a narrow Supreme Court victory over his refusal to make a wedding cake for a gay couple is suing the state after it launched another case against him for declining to create a cake for a transgender woman.

Jack Phillips, owner of Masterpiece Cakeshop in the city of Lakewood, accuses Colorado’s Civil Rights Commission of violating his constitutional rights to free speech, freedom of religion, equal protection and due process, according to the lawsuit filed in U.S. District Court in Denver on Tuesday.

“This lawsuit is necessary to stop Colorado’s continuing persecution of Phillips,” the written complaint alleges. Also named in the lawsuit are Governor John Hickenlooper and Cynthia Coffman, the state attorney general.

Phillips seeks permanent injunctions against the state from taking any enforcement action against Phillips, who the lawsuit says was “vindicated” by the Supreme Court ruling.

In June, the Supreme Court ruled that the Colorado’s civil rights commission was hostile toward Phillips’ Christian beliefs when it cited him for refusing to bake a wedding cake for a same-sex couple in 2012, but did not rule on whether he violated Colorado’s public accommodation statute.

Through a spokeswoman, the civil rights commission declined to comment on Phillips’ lawsuit.

The lawsuit stems from a complaint filed by Denver attorney Autumn Scardina with the civil rights commission in 2017, in which she claims that Phillips refused to bake a cake that “celebrates my transition from male to female,” court documents showed.

Scardina did not immediately return a phone message left at her law office.

The director of the state’s Civil Rights Division, Aubrey Elenis, ruled in June that Phillips discriminated against Scardina.

“The evidence thus demonstrates that the refusal to provide service to (Scardina) was based on (her) transgender status,” Elenis wrote in a probable cause determination.

The finding by Elenis requires both sides to resolve the issue through “compulsory mediation,” the document said.

Phillips is also seeking $100,000 in punitive damages against Elenis “for her unconstitutional actions,” according to the lawsuit.

Daniel Ramos, executive director of One Colorado, a group that advocates for the LGBTQ community, blasted the Alliance Defending Freedom (ADF), the conservative Christian group whose lawyers represent Phillips.

“We have seen the ADF launch similar lawsuits across the country that target nondiscrimination laws and civil rights agencies, and this broad lawsuit they filed on behalf of Jack Phillips reads as more of the same,” Ramos said.

Reporting by Keith Coffman in Denver; Editing by Dan WHitcomb