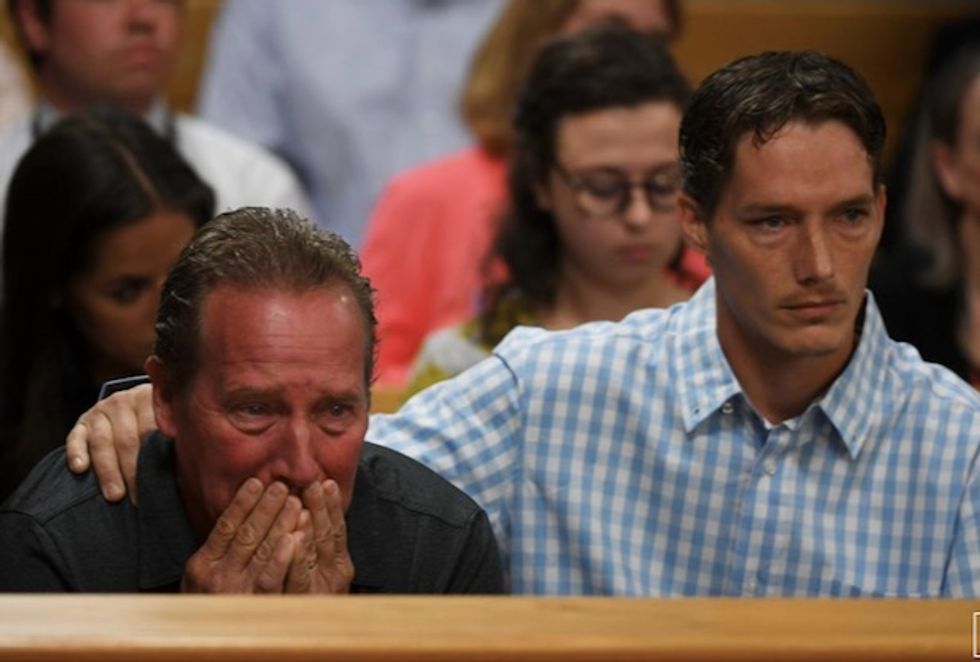 Frank Rzucek, the father of Shanann Watts, and her brother Frankie Rzucek react during the arraignment hearing of Christopher Watts on nine charges including several counts of first-degree murder of his wife and his two young daughters, at the Weld County Courthouse in Greeley, Colorado, U.S. August 21, 2018. RJ Sangosti/Pool via REUTERS

A Colorado oil worker accused of murdering his pregnant wife and two young daughters showed little emotion on Tuesday when a judge read the charges at a hearing punctuated by sobs from the man’s father-in-law.

Chris Watts, 33, barely spoke and did not formally enter a plea to the charges at a hearing in Greeley, about 60 miles (100 km) north of Denver.

His appearance in Weld County Court came one day after authorities released what they said was a confession by Watts. In their account, Watts said he killed his wife because she had strangled their two daughters after an argument.

The case began in the nearby community of Frederick last week when Watts’ wife, Shanann, and their two daughters, ages 3 and 4, were reported missing in the former mining town. Watts had pleaded for their return in interviews with Denver television stations on Aug. 14, the day they were reported missing.

Police arrested Watts the following day and on Monday he was formally charged with multiple counts of first-degree murder, one count of unlawful termination of a pregnancy and three counts of tampering with a deceased human body.

Watts, who was wearing glasses and an orange jail uniform, quietly responded with “yes” or “yes, sir” each time the judge read a charge against him.

Shanann Watts’ father, Frank Rzucek, sat hunched over and sobbing in court as his son put his arm around him.

Rzucek spoke briefly to reporters on Monday, choking back tears and thanking people for supporting his family. “Keep the prayers coming,” he said.

Watts has been ordered jailed without bond and faces the possibility of life in prison or the death penalty if convicted of murder.

Watts told investigators he was having an affair and announced to his wife he wanted a separation, according to an arrest affidavit made public on Monday.

Shanann Watts, after hearing her husband wanted to leave her, killed the couple’s two daughters, Chris Watts told police, according to the affidavit. Watts said he saw his wife on a baby monitor as she throttled one of the girls and that he went into a rage and strangled Shanann.

Prosecutors, in charging Watts with murder in the deaths of all three family members, have discounted his claim that his wife slayed their daughters, Celeste and Bella.

Shanann’s body was discovered in a shallow grave and the couple’s daughters had been stuffed into tanks at the oil field north of Denver where Watts worked, prosecutors said.