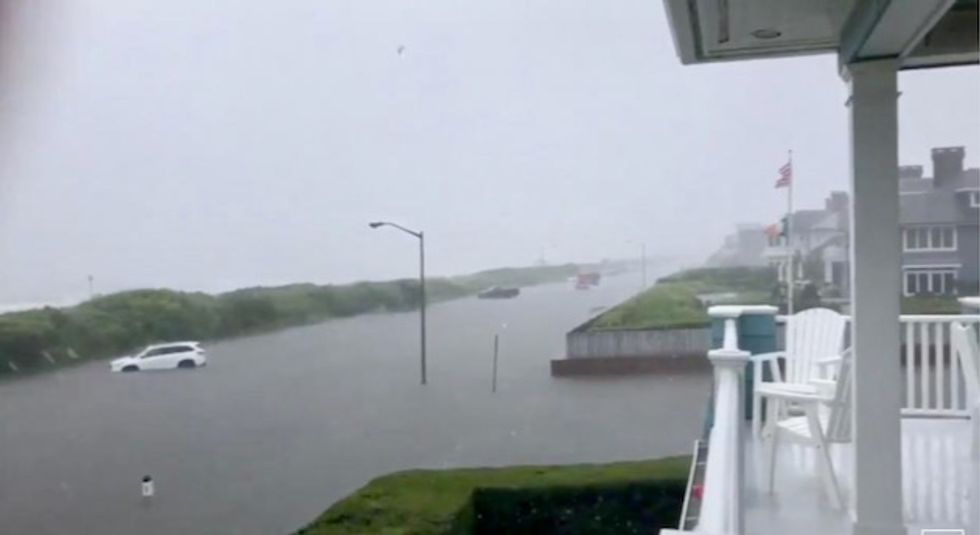 A road is submereged in flood water after heavy rains in Spring Lake, New Jersey, U.S., August 13, 2018, in this still image taken from a veideo obtained from social media. @TheWeatherMstr/via REUTERS

New Jersey declared a partial state of emergency on Tuesday as forecasts for further heavy rainfall posed new danger in parts of that state, New York and Pennsylvania, where rescuers hauled people from waterways, flooded cars and homes.

Following several days of torrential rain throughout the northeastern United States, the National Weather Service issued new warnings for flooding in areas around Binghamton, New York, near the Pennsylvania border, and in New Jersey.

Federal forecasters warned that areas in the region could see as much as 4 inches (10 cm) more rain on Tuesday.

New Jersey Governor Phil Murphy said in a statement five of the state’s 21 counties were under a state of emergency, where additional rainfall could further complicate flood cleanup.

“Parts of our state have received nothing less than historic amounts of rain, and some communities received an entire month’s worth in just a few hours,” said Murphy.

The police department in Brick, a town of 75,000 on the Atlantic coast, said on Facebook that residents were barred from returning to 105 homes without a security escort until township officials finished inspecting them.

In Seneca County, New York, emergency crews were evacuating some residents by boat and taking them to a nearby shelter, the sheriff’s office said in a statement.

“Flooding is one of the primary killers with regards to weather. It’s not tornadoes. It’s not wind damage,” said Brett Rossio, an Accuweather meteorologist. “It doesn’t take much. Even just a foot of water can pull you away very easily.”

More than 8,000 people had lost power in areas drenched by the storms and the Red Cross said it was operating shelters. It was not immediately clear how many people were in them.

Both Pennsylvania and New York have already activated their emergency response centers for the storms, which started over the weekend.

Molly Dougherty, a spokeswoman for the Pennsylvania Emergency Management Agency, said some people affected by the flooding had been recovering from deluges three weeks ago.

“People are looking at losses of most of their belongings and, in some cases, we’re still concerned about the safety of folks and making sure they’re able to stabilize,” said Dougherty.