Fire that prompted closure of parts of Yosemite Park is contained 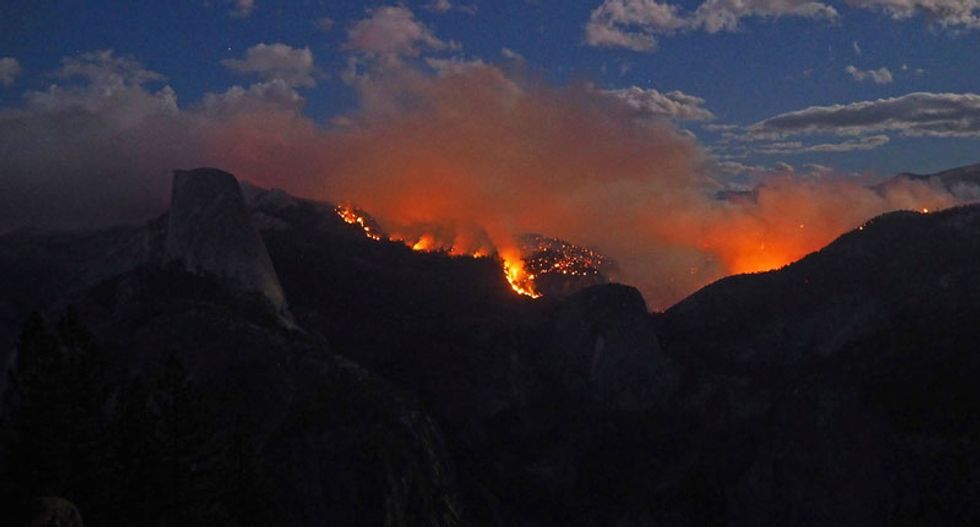 The Meadow Fire burns near Half Dome in Yosemite National Park, California, in this handout photo released to Reuters on September 8, 2014. REUTERS/Jeffrey Trust/National Park Service/Handout via Reuters

A massive and deadly California wildfire that sent choking smoke into Yosemite National Park, causing a temporary closure of large parts of the tourist destination, is completely contained, fire officials said on Sunday.

More than 3,000 personnel have battled the Ferguson Fire, which ignited on July 13 and has burned through nearly 97,000 acres (39,250 hectares) of steep slopes and bone-dry terrain southwest of the park, the California Department of Forestry and Fire Protection, or Cal Fire, said.

Two firefighters were killed while tackling the blaze and 19 others injured, it said.

Cooler weather and calmer winds in recent days have helped firefighters in California and other western states get a handle on major blazes, according to authorities.

“The weather is helping the fires to lay down and they (firefighters) are able to get better containment lines around them,” said Lynnette Round, a Cal Fire spokeswoman.

The heart of Yosemite National Park, shut for nearly three weeks due to the Ferguson Fire, was reopened to the public on Tuesday. But smoke lingered in the air and a few major roads in the park remained closed over the weekend.

There were still sporadic fires within the containment lines, Yosemite park officials said, adding that visitors should exercise caution.

The park’s closure has taken a major toll on the local economy. Some 4.3 million visitors spent an estimated $452 million last year, most of that during the summer.

While there has been progress in battling blazes nationwide, officials worry that lightning strikes in states such as Washington, Oregon and Idaho could spark more wildfires, according to Ashton Robinson Cook, a meteorologist at the U.S. National Weather Service Storm Prediction Center.

“There are quite a few areas in the West where fuels are dry and susceptible to fire-starts and rapid fire-spread,” he said.

Wildfires have consumed nearly 5.9 million acres (2,387,650 hectares) of the United States so far this year, well above the national average for the same period over the past 10 years of 4.8 million acres, according to the National Interagency Fire Center, a monitoring agency.