Fundraise or 'look for a job,' Republicans warn after close election races 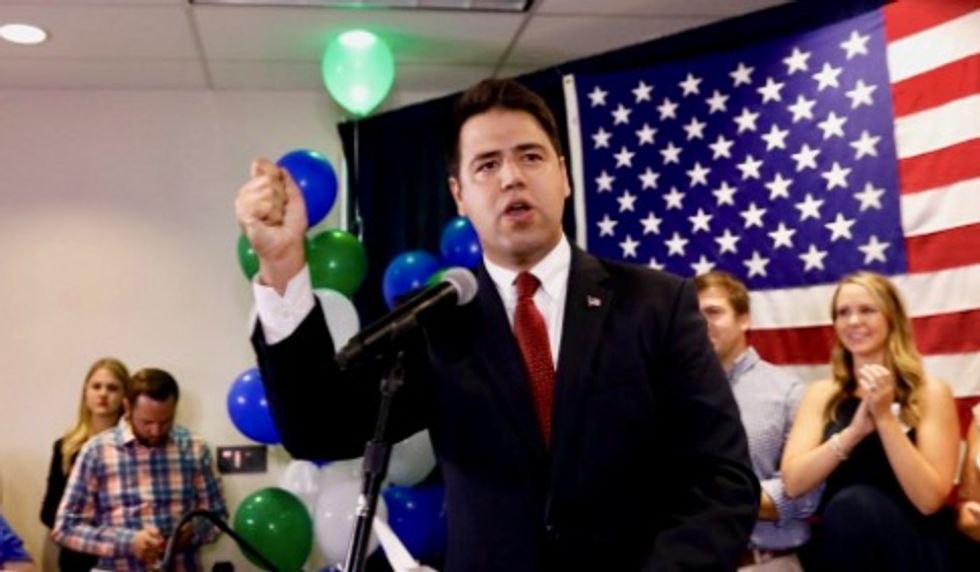 As Republican candidates backed by President Donald Trump clung to small leads in closely watched races in Ohio and Kansas on Wednesday, nervousness grew in Republican circles about their ability to continue extending millions of dollars in aid to candidates in November’s Congressional elections.

Republican Troy Balderson may have eked out a victory in a special election for a U.S. House of Representatives seat in a reliably conservative district in Ohio, but was leading the Democrat Danny O’Connor by only about 1,700 votes or less than 1.0 percent. The final result could be days away as state officials count more than 8,000 provisional and absentee ballots.

In the Kansas primary to select a Republican candidate for November’s mid-term U.S. elections, Kris Kobach was unable to convert an endorsement by Trump into a resounding victory. He clung to a 191-vote lead over his Republican primary opponent, current Governor Jeff Colyer, with potentially thousands more provisional and absentee ballots outstanding.

Credit for Balderson’s narrow margin in Ohio is going to the $4 million-plus the party and outside groups pumped into the district in the final weeks to boost voter turnout. The infusion of cash into a district that has been represented by Republicans for 30 years further triggered alarm bells for the party.

That kind of cash from the national party or its allies may not be available for every at-risk Republican on the ballot in November, with Democrats already raising more money in many seats.

“After last night’s results, endangered members should be burning up the phone lines to donors - either to build their own fundraising or look for a job. The party won’t be able to save everyone,” said Joe Brettell, a Texas-based Republican strategist.

In November, all 435 U.S. House members and one-third of the Senate stand for reelection. Democrats need to pick up 23 seats to take control of the House, and there are dozens of seats currently held by Republicans with larger Democratic populations than the Ohio district.

“Moving forward, we cannot expect to win tough races when our candidate is being outraised,” said Corry Bliss, executive director of the Congressional Leadership Fund, a Republican Super PAC that supported Balderson in Ohio. “Any Republican running for Congress getting vastly outraised by an opponent needs to start raising more money.”

Bliss’s group as of mid-July had raised $96.6 million and had $73.3 million in remaining cash.

Republicans hope Balderson’s narrow win on election night will jolt the field out of complacency.

The biggest unknown may be just how much cash remains for Republicans to tap.

But network of donors managed by Charles and David Koch have gone in the opposite direction, warning Republicans they may not support their candidates in large part because of Trump’s protectionist trade policies.

There may still be a well of cash for Republicans thanks to the deep-pocketed donors delighted last year when Republicans passed sweeping tax cuts.

“There is going to be an awful lot of thank-you checks written for the tax bill,” Brettell said.

DEMOCRATS PORTRAY OHIO AS A VICTORY

In Democratic circles, the Ohio results were cast as a win, even if their candidate was not victorious. Other Republicans, including Vice President Mike Pence and Ohio Governor John Kasich, had rushed to Balderson’s aid in a district Kasich once represented.

“He should be running scared this fall,” David Pepper, chair of the Ohio Democratic Party, said of Balderson, who faces O’Connor in a rematch on Nov. 6. “He’s not going to have Donald Trump, Mike Pence and all that money bailing him out.”

Both races left unanswered questions about whether Trump will be able to lift endangered members to victory, regardless of how much cash they have.

Trump took credit for Balderson’s lead, writing on Twitter that the campaign took “a big turn for the better” after he appeared in the district on Saturday. Mark Weaver, a Columbus-based Republican strategist who did not work for Balderson, said Trump’s visit helped fuel the party’s get-out-the-vote efforts in the race’s final days.

But Pepper noted that Trump’s presence energizes Democrats as well, adding that “if he thinks that finish in this district is a good result, all power to him.”

The Ohio race mirrored other special federal elections over the past 12 months, including upsets by Democrat Conor Lamb in a Pennsylvania congressional race in March and by Democrat Doug Jones over Roy Moore for an Alabama Senate seat in December of last year. Trump stumped for both candidates in losing efforts.

In those races, rural voters favored Trump-supported candidates, but turnout in those regions lagged heavy suburban turnout, where Democrats expanded on margins won by Hillary Clinton in 2016.

Kobach had hoped to ride his ties to Trump to victory after the president endorsed him in a tweet, but even as Kobach sought to declare himself the virtual winner on Wednesday, he acknowledged he could still lose, and a protracted recount could aid Democrats.

Kansas state law allows for a recount if the vote margin is within half a percentage point, but the candidate has to request the recount. The candidate who requests the recount must pay for it if the results are unchanged by that process, Kobach said.