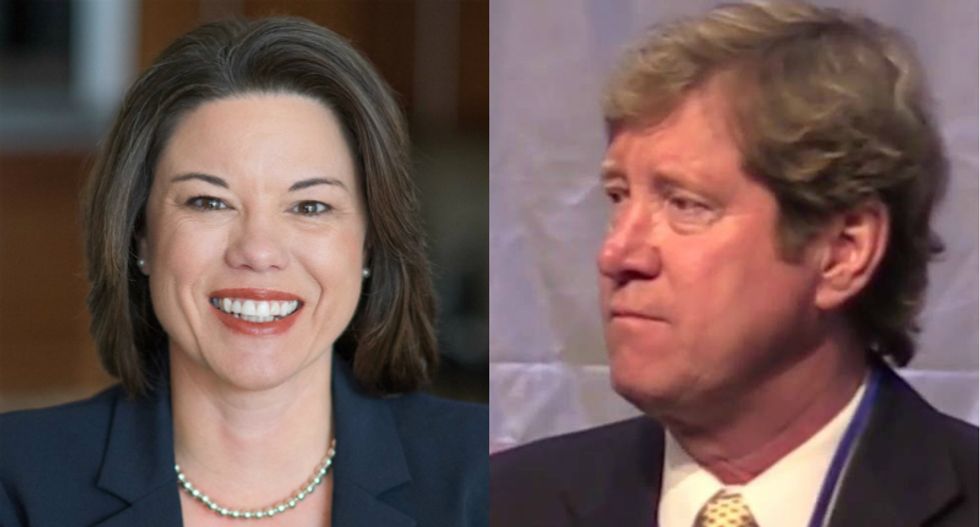 A GOP congressman who once compared LGBT people to rapists is facing a challenge from a lesbian Democrat during this fall's midterm election.

Lewis has made headlines in recent months after comments he made on his nationally-syndicated conservative talk radio show resurfaced. In one 2013 segment, he made a bizarre "equality" argument that seemed to compare queer and trans people to rapists and murderers.

“So if the law says that we’re not going to allow three people to marry," he continued, "then you’ve got to treat everybody the same way."

Though his show only ran from 2009 to 2014, Lewis continued his rants elsewhere. In a 2015 blog post, the congressman said he wished religious freedom laws would allow for more discrimination against LGBT people.

The Minnesota Republican also claimed on The Jason Lewis Show that African Americans have an "entitlement mentality" and that welfare has harmed the black community worse than Jim Crow laws. He went on to claim that there's always "trouble" where black people gather and that black-on-white crime is the root of a growing "race war" in the United States.

This isn't the first time Craig and Lewis have faced off at the polls. They both fought for the then-open congressional seat Lewis now holds in 2016. During the campaign season, the Daily Dot reported at the time, a Minnesota GOP official shared photos of Craig's family next to Lewis' after he became the party's nominee in an attempt to disparage her for being married to a woman and having children with her partner.

"In case you’re wondering – the family photo page is the families of our candidates and then of Jason Lewis’ opponent – Angie Craig," Minnesota GOP communications chairperson Vickie Froelich wrote in a Facebook post. "She’s liberal and this is her family. She and her female marriage partner and their 4 teenage sons."